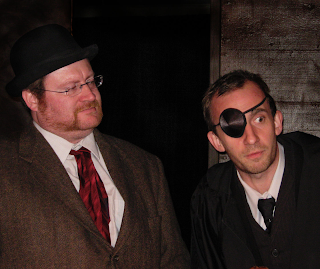 TAO presents “The Hound of the Baskervilles”


Olympia’s most outlandish theater troop, Theater Artists Olympia, in co-production with The Oufit from Tacoma is doing Steven Canny and John Nicholson’s spoof of the classic Sir Arthur Conan Doyle story “The Hound of the Baskervilles” in the basement of the Eagles Club in Olympia.

The venue itself is cheesy and cheap, through an unmarked and barely lighted door and down steep stairs into a large, clean typical basement space where hard metal folding chairs have been lined up to face a makeshift stage. The set – a door on rollers that is turned around to change from indoor to outdoor settings and a few folding panels on wheels that are moved about to represent different settings such as the Baskerville manor and the moors – looks cheap and, with the exception of the door, are totally unnecessary. It’s a pet peeve of mine, and maybe it doesn’t bother others as much as it does me, but I hate it when stage hands constantly move set pieces around in full view of the audience. In most plays it destroys the flow of the action and takes the audience out of the play. It may be argued, however, that in this play it becomes part of the comic set-up that plays right into the manner in which the actors repeatedly break the fourth wall to argue with each other and with the audience. It’s funny when the actors step out of character; it’s not funny when stage hands move walls around (the exception opening night being when stage manager Eric Mark couldn’t get part of a wall to stand still and ad-libbed a comment). 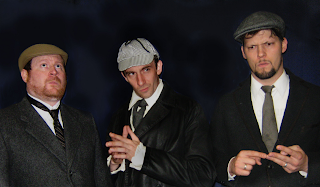 Beau M. K. Prichard as Watson and Christian Doyle as Sherlock Holmes in “The Hound of the Baskervilles” (top); Prichard, Doyle and Brian Lewis as Sir Henry Baskerville (bottom).
The essentials of Doyle’s famous story, have not been changed, but it is retold by Canny and Nicholson in a style reminiscent of “The Complete Works of William Shakespeare (Abridged)” – even down to the speeded-up retelling of the complete first act at the beginning of the second act, which is done to make a point because actor Christian Doyle is pissed off at the audience. (Not really, it's an act.)
Doyle (not related to Arthur Conan as far as I know) plays Sherlock Holmes and many other characters, including a very ugly woman with whom Sir Henry Baskerville (Brian Lewis) falls in love, and the ugly woman’s Egor-like brother. Lewis also plays multiple characters, and Beau M. K. Prichard plays a funny and rather ineptly dignified Doctor Watson.  TAO promotes the show as featuring “Three actors, 30 accents, 50 quick changes and one bloody great time.” I didn’t keep count of the number of characters or quick changes, but there were quite a few, including at least two times when Lewis loses his pants and counting a couple of stuffed rag dolls as characters.
“The Hound of the Baskervilles” is hilarious throughout, but it did begin to drag a bit toward the end. (Perhaps it was the hard metal chair – I recommend bringing a pillow to sit on.) All three of the actors are outstanding. Their timing is great. Lewis and Doyle in particular display great skill in quickly changing characters, and all three are able to strike outlandish poses and hold them for the many, many times they pretend to be still images – Lewis playing a one-man photo gallery of everyone in the Baskerville family, and the trio striking crazy poses as lights go on and off in a train. These sequences alone are worth the price of admission and amply display the acting skills of Lewis, Doyle and Prichard, and the directing skill of Mark Alford, a recent Evergreen State College graduate and founder of the student production company Riot To Follow Theater Productions. The show marks Alford’s excellent community theater directorial debut.
For an evening of Halloween hilarity I recommend this farcical version of “The Hound of the Baskervilles.”
When: 8 p.m. Fridays and Saturday and 2 p.m. Sunday through Nov. 6.
Where: The Eagles Club Underground, 805 Fourth Ave. E., Olympia
Tickets: $12
More information: olytheater.com or brownpapertickets.com
Posted by Alec Clayton at 4:56 PM