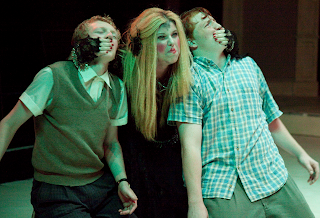 Coleman Hagerman is Will Halloway, left, Jefri Allen Peters plays The Dust Witch, and Phil Olson, right, is Jim Nightshade in “Something Wicked This Way Comes” at Lakewood Playhouse.

“Something Wicked This Way Comes,” now playing at Lakewood Playhouse, is a complex story that requires more skillful directing and acting, and complicated lighting and staging effects than many community theaters can handle.

But director David Domkoski and his cast and crew are up to the challenge, for the most part.

Despite some outstanding acting and sophisticated lighting and sound effects, something doesn’t quite mesh in this production. It’s fascinating, eerie and haunting in all its pieces, but the whole doesn’t gel.

The problem lies primarily in the episodic nature of the script, which is adapted from Ray Bradbury’s novel. Things happen in one scene, and then the next and the next, and they’re loosely connected to a dramatic thread, but the scenes do not flow together.

There is a disturbing staccato effect to the transitions, which might add to the horror but was a drag on the overall production. Characters and scenes are not fully developed. There is not a single sustained scene until a long dialogue between Will (Coleman Hagerman) and his father (Michael Griswold) in the second act.

Bradbury’s classic sci-fi/horror tale is a coming of age story about two Midwestern boys, Will and Jim (Phillip Olson), who are intrigued and horrified by the circus run by the mysterious Mr. Dark (Damian Gennette), who starts to take over the town and seize the souls of its innocent inhabitants. Only Will seems to understand what lies beneath the facade of the haunted merry-go-round.

The principal actors are very good. Olson, a senior at Gig Harbor High School, and Hagerman, a 15-year-old student at Covenant High School in Tacoma, are experienced actors despite their youth, and they are very believable and engaging as the two protagonists. (Don’t believe that convincingly playing teenagers comes naturally to teenagers; good acting is good acting at any age.)

Some of the best acting in this production comes from Griswold and Susan T. Beers as Miss Foley. Griswold plays Mr. Halloway as likeable, despite obvious weaknesses. Beers plays Miss Foley with intensity. You feel her constant tension.

Meanwhile, Gennette practically makes the audience shrivel with his laser-like stare. He excretes creepiness with his posture and expressions.

Other actors who stand out in smaller roles are Jenifer Rifenbery as Mrs. Nightshade and Cherilyn Williams who plays Miss Foley as a young girl.

In Rifenbery’s one extended scene, a dialogue between Jim and his mother, she plays the mother with such heart that the audience feels her love and fear for her son. Williams, a child actor with experience at Manestage in Sumner and Seattle Children’s Theatre, makes her Lakewood Playhouse debut in this production.

The sound and lighting effects were powerful but almost overwhelming in places (lighting by Kristin Zetterstrom, sound design by Rory Shackles, and digital effects by Christopher Domkoski). In some scenes, actors could not be heard over the sound effects.

All but the principal actors doubled as ensemble actors playing townspeople and various freaks and monsters with choreographed dance-like movements and elaborate costumes by Sarah Gibson, with imaginative carousel animals created by Otto Youngers and freak masks by Maria Pontillas.

The movements by the ensemble were fascinating early on, but became repetitious and could have been improved by a sprinkling of professional dancers in the ensemble.

This show is not appropriate for small children. There is gunfire, non-harmful chemical smoke, strobe lighting and frightening clowns and other monsters.