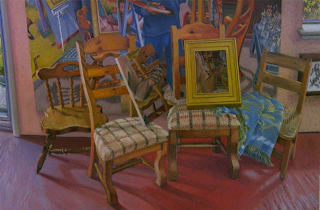 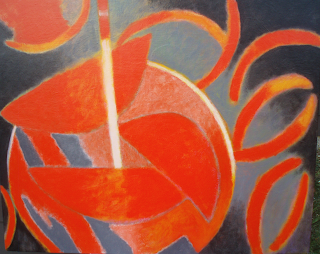 
Juried shows are always a mixed bag, with some outstanding art and some stuff that makes you wonder why it was included. This week reviewing the 9th Annual Juried Exhibition at Tacoma Community College, I'll briefly talk about the "wonder why" stuff first, and then get on to the outstanding art.

Traditional landscapes that offer nothing new or exciting have no reason for being. Fortunately, there are fewer of these in this show than usual. One example is Helena Victoria Olson's oil painting "Summer Fun on Hood Canal." It's a nice painting, but why would anybody want to do in oil on canvas what is essentially a candid shot of someone wearing a life preserver with water and mountains in the background? And I don't get why paintings such as Mike Ferguson's "Picking Something Up" and Lorraine Toler's "Sarangheya Halmoni (Grandmother's Love)" were included. Both look sketchy and amateurish, although Ferguson's painting of a person in a store has a nice little rhythmical march of impressionistic color blobs representing items on the shelves, and Toler's picture has some sentimental appeal.

It's also a shame that there's such a dearth of sculpture, but many more sculptural pieces would have made the gallery too crowded.

On the upside there are exciting pieces by Ron Hinson and Barlow Palminteri, whose two-man show at South Puget Sound Community College last year was probably the best of the year outside of major museum exhibitions. In this show, Palminteri has a painting called "The Couple," which is a cluttered studio scene with chairs stacked in front of easels and a barely seen artist dressed all in blue with paint brush in hand. The couple of the title is hinted at but not actually shown. Other than the artist, who is shown only from chest down, the only human presence is in the painting-within-a- painting of an artist's hand. There are two versions of this little painting, both stacked on chairs in the studio. At first glance this painting looked far more chaotic than the carefully composed pictures I've come to expect from Palminteri, but on closer inspection it becomes clear that a composition centered on the blue pants and shirt of the artist brings order to the chaos.

Hinson is well known for complex and colorful painted constructions that can be startling in their variety of shapes and textures. In his untitled piece in this show he has added a new element - found objects: a wagon wheel, a strip of fur, and a large shape covered with a cloth printed with a design featuring the Pony Express. These added collage elements - not totally new, but pushed further than I've seen before - add a new level of interpretation. In addition to the pure abstract form, viewers can now ponder these added elements, which to me seem to reflect back on a long ago childhood.

Hinson's wife, June-Kerseg Hinson, is also represented with a nice, semi-abstract pastel with some marvelous colors and a good use of illusory space.

The best pure abstract painting in the show is Alain Clerc's "Table Top." The colors and shapes are solidly designed, and there's a great gritty-soft surface quality.

Also very striking is a small photo by Peter Serko called "Man in Retro," which is kind of a dark and moody picture of a man in a restaurant seen through a big picture window. The similarities to Edward Hopper's "Nighthawks" are undeniable.

My newly discovered favorite local painter, Becky Knold, is also represented in this show with an acrylic painting called "Green Beginnings." Unfortunately, it's not one of her best works. Many of her paintings have a marvelous surface quality that reminds me somewhat of pastels by Degas (and also the surface of Clerc's painting mentioned above). This one lacks that nicely layered and scumbled look.

Finally, there are two strong prints by Bill Colby from the "Helix" series recently featured in his show at Flow. If you missed that show, here's your chance to see two of these prints which are a spiral burst of pure energy.

Through Oct. 21, 10 a.m. to 5 p.m. Monday-Friday
Tacoma Community College, Building 5A
entrance off South 12th Street between Pearl and Mildred, Tacoma
Posted by Alec Clayton at 11:19 AM