Gritty musical ‘Rent’ is a stunner 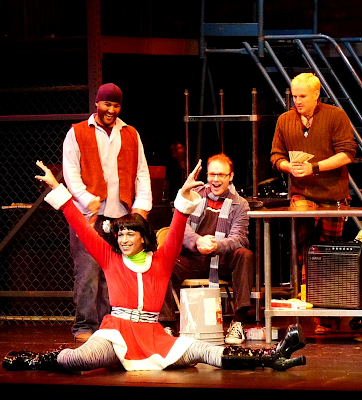 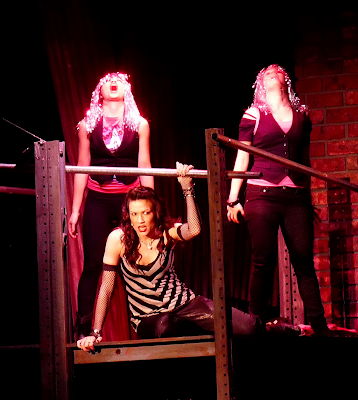 Seldom does an American musical come along that defines an era. In the 1950s, it was “West Side Story,” in the ’60s it was “Hair.” Toward the end of the millennium it was “Rent,” which, for the first time this year, has come available to community theaters.

The regional premiere of “Rent” at Tacoma Musical Playhouse is musical theater the way it is meant to be. The story, the sets and costumes, the acting and the music are stunning, sad, uplifting and transformative. Grab a seat and hang on for a dose of gritty and heartbreaking reality with tense and lovely relationships set to music.

“Rent” is not for everyone. The language is the language of the streets. The characters are a microcosm of the bohemian underbelly of society. They are casual about drugs and sex.

A contemporary update of Puccini’s opera “La Bohme” written by Jonathan Larson and directed for TMP by Jon Douglas Rake, “Rent” depicts a year in the lives of a motley group of young people living in an industrial loft in Manhattan’s East Village near the end of the 20th century. Mark (Matt Posner) is a filmmaker and the story’s narrator. Roger (Aaron Freed) is a musician and aspiring songwriter who wants to write just one great song before he dies. He is HIV-positive. His girlfriend has recently committed suicide. Tom Collins (Kevin L. Douglass) is an anarchist computer genius philosophy professor who falls in love with Angel (Thaddeus Wilson), a streetwise drag queen. They too are living with HIV. Joanne (Antonia Darlene) and Maureen (Alison Monda) are lesbian lovers. Mimi (Katin Jacobs-Lake) is an exotic dancer and drug addict. Benjamin Coffin III (Jesse Jonathan Smith) is the former roommate who sold out to the establishment. He married into a rich family and now owns the building the others live in. And finally, there is an outstanding ensemble cast who appear as various street performers, homeless people, cops, and the parents of the principal characters.

This is as good as any cast I’ve ever seen in a large production in the South Sound. Posner always is a strong singer and dancer, and as the narrator in “Rent” his unaffected style smoothly moves the storyline. Wilson plays Angel as sweet and gentle as he is audacious. His singing is soft and clear, while Douglass as Tom Collins is strong and confident and sings with power and majesty. Outstanding songs are brought to the stage by Darlene, with her powerful and sultry blues style, and Freed as a moody troubadour. Monda, who doesn’t emerge from the ensemble to fill her principal role until near the end of the first act, electrifies the theater with her comical, dramatic, acrobatic rendition of the song “Over the Moon.”

I saw this show at an opening weekend matinee, and that afternoon the cast and the scaled-down orchestra were a little slow to hit their stride. The title song and first big musical number did not have the electricity it should have. The drummer was too loud and a bit static. It was not until the rousing “Today for You” that the music soared.

Posner’s and Darlene’s sweet and comical “Tango Maureen” was wonderful. The big first act closing song, “La Vie Bohme” could raise the dead. This song and dance number with solos by not only most of the principals but also some excellent singers from the ensemble is an homage to “La Bohme,” as well as to the great table-dancing banquet scene in “Hair.”

Other musical highlights include Stacie Pinkney Calkins stepping forward from the ensemble to sing a breathtaking gospel-style solo on “Seasons of Love” and Douglass’ operatic and plaintive ballad to his dying lover, “I’ll Cover You.”

Also commendable are the industrial loft set designed by Will Abrahamse and Jon Douglas Rake, John Chenault’s’ lighting, and some terrific costumes that could have been gathered from local thrift shops or from cast members’ closets (no costume designer credited in the program). I especially loved Roger’s jacket and Mimi’s electric blue pants.

One final note: Larson, who wrote the book, music and lyrics, never got to see “Rent” in production. He died on the night of the final rehearsal without ever seeing an audience response to his creation.