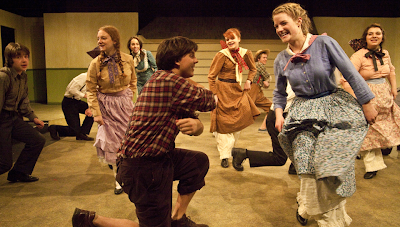 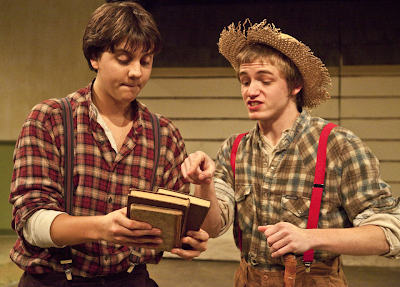 The musical “Tom Sawyer” at Lakewood Playhouse has all of the charm but none of the bite that has made Mark Twain an enduring favorite for almost 150 years. It’s a lightweight musical comedy that should be just the ticket for post-holiday family entertainment – a kind of nonalcoholic nightcap to the season which mercifully this year spared us most of the endless rounds of “A Christmas Carol” and “It’s a Wonderful Life.”

Written by Ken Ludwig with music and lyrics by Don Schlitz, and directed by Marty Mackenzie, this version of the Twain classic has all the joy of a revival plus a good helping of romance and mystery.

Overall the cast, largely made up of high school students, is excellent, and the singing and dancing are exuberant. I especially loved the beautiful “Raising a Child” as sung by Aunt Polly (Karen Christensen) and Judge Thatcher (David Jensen), and the rousing gospel tune “It’s in the Bible” by Tom (Jonathan Hogue) with gospel choir backup by the entire cast.

I would have enjoyed the show more if about 30 minutes had been trimmed. Tani Wright’s choreography is unexciting, perhaps because she had to keep it simple for a few of the chorus who barely slogged through their moves.

Larry Hagerman’s set is a gallant attempt at originality that works on a practical level, but which I found to be bland. I liked the use of the balcony area and the orchestra placement, but the main backdrop is a fold-out wall that looks something like a cattle chute – distracting and unattractive until it opened out for the cave scene.

Kudos to the young actors who played the principal characters: Hogue’s Tom Sawyer, Kat Christensen as Becky Thatcher, and Aaron Berryhill in the enviable role of Huckleberry Finn. With young actors like this on area stages, a bright future for South Sound stages is assured. Hogue’s Tom Sawyer is charming, sincere and thoroughly believable. Berryhill plays Huck with great energy and excitement.

Christensen immerses herself so thoroughly into the role of Becky Thatcher that you forget she’s acting. She conveys an encyclopedia of sincere emotions with simple facial expressions. At one point while the ensemble cast was involved in a big musical number she conveyed the complexity of her feelings for Tom with a momentary look cast across the stage. It was so fleeting and so far removed from the main action that most of the audience probably missed it, but those of us who saw it witnessed a moment of great acting.

Outstanding in supporting roles are Jensen as Judge Thatcher, Hagerman as Rev. Sprague, and Karen Christensen as Aunt Polly (she is by far the best singer in the cast with a voice that carries beautifully and just a tiny bit of a country twang in keeping with the role).

Special kudos to the orchestra under the direction of Lisa Sutter. Miranda Goodroad’s fiddle and Don Blagsvedt on mandolin, banjo and acoustic guitar provided the absolutely perfect feel of a country band playing at a hoedown in St. Petersburg, Mo., in 1840.