‘Over the River’: Warm slice of family life 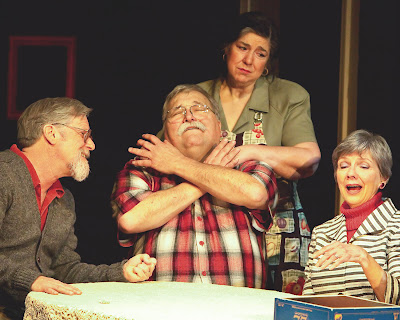 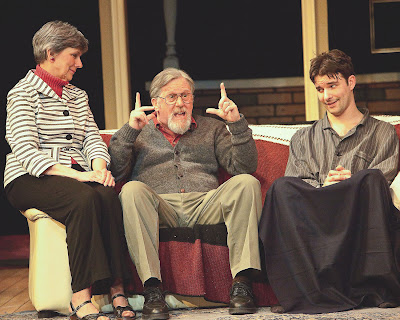 Tacoma Little Theatre presents the tearjerker “Over the River and Through the Woods.”

“Over the River and Through the Woods” by Joe DiPietro is billed as a comedy, and DiPietro is best known for writing the books to musicals including “I Love You, You’re Perfect, Now Change” and his most recent, “Memphis.”

“Over the River” starts out as a warmhearted comedy but turns into a tearjerker that is too maudlin for my taste. However I’m sure it will pat the hearts of many audience members – the audience at Tacoma Little Theatre at Sunday’s opening weekend matinee was clearly touched.

DiPietro, who grew up in New Jersey, where this play is set, must have known grandparents or aunts and uncles who were very much like the elder Cristanos and Gianellis. How else could he have painted such vivid pictures? These people (which is how grandson Nick refers to them) are lovably quirky and obsessed with family and food.

“Tenga familia,” is the play’s leitmotif. It literally means I have family. But to the Cristanos and Gianellis it may more accurately mean life is family and family is life. So they are confused and disturbed when grandson Nick (Chad Russell) announces that he’s moving to Seattle. Nick’s parents and older sister have already moved away, and the old folks can’t understand why family members do not stay put.

Director Doug Kerr designed the very striking set, the Gianellis’ living and dining rooms. There are no walls. Rather, door and window frames and numerous empty picture frames hang in front of a black curtain. The audience sees actors through the walls as they approach doorways to make their appearance onstage. This bit of stage magic heightens the dramatic effect of periodically stopping the action while various actors directly address the audience. It is very effective way of allowing the audience into their thoughts and provides glimpses into the family from various viewpoints.

The acting throughout is stellar, although while Russell’s gestures and facial expressions are spot-on for the character he’s portraying, they are too exaggerated in some places. In certain scenes, especially with Caitlain (Stacia Weber), the girl his grandparents try to match him up with, and when speaking directly to the audience Russell is outstanding, but he goes overboard when he expresses his frustrations with the grandparents. Granted, Russell is playing a character who is so excitable that – well, I won’t give that away – but still he needs to tone it down just a notch.

Larry Bommbarito as Frank Gianelli, Dana Galagan as Aida Gianelli, Randy Clark as Nunzio Cristano and Syra Beth Puett as Emma Cristano are all outstanding. I don’t think there was a single gesture or inflection from any of them that was not just right. And Weber in her first ever stage appearance comes across as a real pro. She is absolutely believable and natural.

Aida’s refusal to hear what anybody says as she keeps offering food – her panacea for everything, Frank’s stubbornness and good humor, Emma’s motherly concern and fervent prayers, and Nuzio’s too-loud expressiveness are all funny and endearing. The family’s gathering for a game of Trivial Pursuit is as funny as any such scene ever acted out.

If DiPietro had not over done the sentimentality and if he had cut out the final scene, which is nothing more than an extended and unnecessary epilogue, “Over the River” would probably compare favorably with such comic classics as “You Can’t Take it With You” or great situation comedies like “All in the Family.”