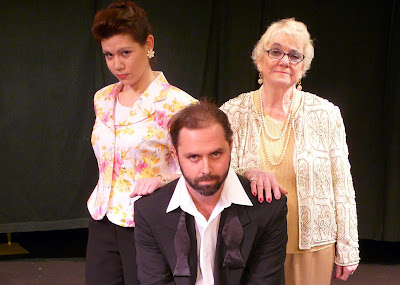 Olympia Little Theatre’s latest production is “Murderers,” one of many unique plays from the prolific pen of Jeffrey Hatcher, who has given us memorable plays such as “Three Viewings,” “Murder by Poe,” “Dr. Jekyll and Mr. Hyde,” “Compleat Female Stage Beauty,” and the stage adaptation of “Tuesdays With Morrie.”

Hatcher also was a longtime writer for the television series “Columbo,” which becomes apparent early in “Murderers.”

“Murderers” is a set of three monologues related only in that all of the murderers are connected in some way with the Riddle Key Luxury Senior Retirement Living Center and Golf Course in Riddle Key, Fla.

I saw a dress rehearsal a week before opening night.

This play is not a murder mystery. There’s never any doubt as to whodunit. It is a sardonic comic drama. The three actors step on stage and each announces, “I am a murderer” as if at a meeting of Murderers Anonymous.

After that opening, they appear one at a time to tell their stories and act out the parts of the various people involved.

Here’s the structure of the play: curtain, tell story, curtain; repeat three times, each with a different actor and a different set.

In order for such a bare-bones and unorthodox play to be entertaining, the story lines must the brilliantly plotted, the monologues must be intelligent and sparked with humor and drama, and the acting must be superb.

Under the co-direction of Kathryn Beall and Toni Holm, Olympia Little Theatre scores high on all three.

The actors are Brian Jansen as Gerald Halverson, Barbara-Ann Smith as Lucy Sticker, and Deya Ozburn as Minka Lupino.

Jansen burst onto South Sound stages three years ago with a mesmerizing performance in “Picasso at the Lapin Agile” followed by a hilarious role in “Take Me Out.” Then, after doing a small role in Harlequin’s “Shining City,” he dropped out of acting for more than a year.

It’s good to see him back in one of his most challenging roles yet. He opens this play standing on a bare stage in front of a bench, the only set piece (I can’t explain this set without giving away the plot).

He explains that like murderers in everything from James Bond movies to “Columbo” he wears a black tie and dinner jacket. His mother told him formal occasions call for black ties and murder is a formal occasion.

With this, he sets the tone for the black humor and constant references to staged murder mysteries that will resonate throughout all three monologues.

Jansen is convincing as the murderer and does wonderful things with his eyes and body language to draw the audience in. We know he’s going to kill someone, but not who or how, and the suspense builds dramatically as he gives hint after hint before his tale comes to an ironic climax.

I don’t remember seeing Smith in prior shows, but according to her credits in the program for this show I must have seen her in “Moon Over Buffalo.” How could I have missed her? She is fabulous.

Smith plays the oldest of the characters, 78-year-old Lucy who hates it when a former rival for the love of her husband shows up in the retirement village. Of the three scenes, Smith’s provides the most comedy. Her character, Lucy, is feisty and loveable.

Minka Lupino, played by Ozburn, is anything but loveable. She is a devious and heartless mass murderer, and Ozburn plays her with glee. She throws her full body into the roles of various characters such as a drunk with a terrible cigarette cough and an ageing mystery writer who talks with a rasp and drags a crippled foot behind him.

This is an intelligently written and well-acted play.

I highly recommend it.