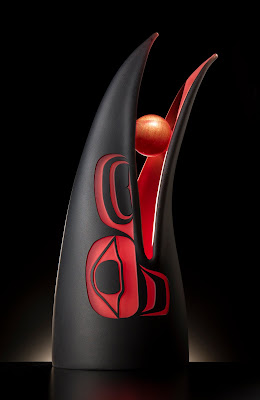 Preston Singletary blends old and new at Museum of Glass

Preston Singletary's mid career retrospective exhibition at Museum of Glass blows the lid off many of my theories about glass and contemporary Native American art.

There is much to admire about traditional Native art - the symbolism, the reverence for heritage, the mystery and power of the imagery. But I am usually left cold by contemporary artists, Indian or white, who make their own versions of traditional totems, masks and baskets. And doing it in glass doesn't make it any better; it's still imitation.

There are exceptions. Joe Fedderson, for instance (recently featured at Tacoma Art Museum) creates thoroughly contemporary prints that are inspired by Native art, but which are patently his own.

Preston Singletary, on the other hand, makes traditional art with blown and cast glass. Not more contemporary art inspired by traditional art (despite claims to the contrary), but just the same stuff his ancestors made only with more modern methods and materials. According to my own often-expressed feelings about that sort of thing, I should disdain his work. But I have to admit his big show at MOG is mind-boggling. Perhaps it's the lighting and the size and variety of the show that is so impressive. The walls are dark and each artwork is individually and dramatically spotlighted. The overall impact is powerful and magical, and most if not all of the individual pieces are beautiful.

The best pieces are the most reductionist, the ones that are simple, clean and stark, such as "Raven Steals the Sun" and "Raven Steals the Moon." These are identical other than the objects held in the raven's mouths. Each is a highly stylized head of a raven with its open beak reaching upward. The colors are black and fiery red. "Sun" holds a red sphere in his beak; "Moon" holds a white disk with a carved frowning face. It is the simplicity and elegance of form that makes these works outstanding, and the better of the two is the "Sun" because it is simpler. The carved face on "Moon" detracts from the purity of form and makes it the less beautiful of the two. Or "Canoe Dishes," three very simple canoe-shaped dishes in translucent green, orange and blue. These are stunningly beautiful.

By contrast, the works I enjoyed least are the more elaborate designs such as some of the more complex masks and the large house front screens. There are stories and traditions behind these that may be fascinating, but the narrative overwhelms the visual impact, making them more enjoyable to think about but less enjoyable to look at than some of the simpler and purer forms. For example, the various pieces titled "Transference" illustrate one of many stories from Tinglit culture about Raven, but to understand the stories you would have to read the catalog or research Tinglit culture and history. Coming at it without knowledge of the stories, you see only a somewhat comical image of a man with a long tongue sitting on the back of a raven.

Many of the images, most especially the masks, are both comical and scary. Overall I was very impressed with the show, and I imagine if I studied the culture more I would enjoy it even more.


"I think Alec always let's the art get a hold of him, and then gives it a chance to see if it can hold on." He is very honest about how the art works or not, both from a academic, and a visceral point of view." - Paula Tutmarc-Johnson, Two Vaults Gallery - Read my column Visual Edge in the Weekly Volcano.
Posted by Alec Clayton at 7:47 AM