With talented cast and crew, 'End of Days' is a delight 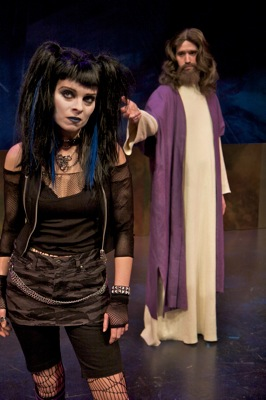 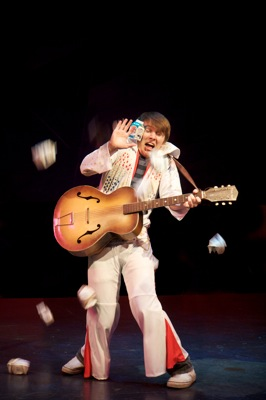 The News Tribune
The Olympian

Amy Hill as Rachel Stein and Robert McConkey is Jesus

End Days” at Harlequin Productions is two hours of hilarious weirdness featuring the strangest yet almost believable extended family you’ll ever fall in love with.

The Steins are nonreligious Jews who escaped New York City for the peace and quiet of the suburbs after 9/11. Arthur (Scott C. Brown) escaped the collapse of the twin towers, but 65 of his co-workers were killed. He has been severely depressed since then and can do nothing but sleep. His wife, Sylvia (Ann Flannigan) has found Jesus. Literally. She sees Jesus (Robert McConkey) and talks with him. Their 16-year-old daughter, Rachel (Amy Hill in exaggerated Goth garb and makeup) is now visited by Stephen Hawking (also Robert McConkey), whom no one else can see, and by their neighbor, teenaged Nelson Steinburg (Rian Wilson), who is infatuated with Rachel and is unable to function without wearing his white Elvis jumpsuit.

Sylvia is convinced that the rapture is coming soon, and she cajoles Jesus into telling her when – and he lets it be known that it is coming Wednesday.

A creation of playwright Deborah Zoe Laufer’s fevered imagination, “End Days” could easily come across as too artificial and absurd, but in the hands of Harlequin Productions’ cast and crew it is absolutely delightful. Much credit must go to director Linda Whitney and to each of the cast members for honing the peculiarities of their characters – Arthur’s disconnect with reality, and his underlying sweetness; Sylvia’s desperation and her love for her family; Rachel’s justifiable anger and rebellion; Nelson’s wide-eyed wonder at just about everything – especially Rachel and scientific theories; Hawking’s sly humor and Jesus’ charm. This cast, individually and in their interaction, makes these absurd characters as real as your next door neighbor.

Brown’s performance is an object lesson in the art of acting. He makes the slightest of expressions tell a lot about his psyche – the weariness in the way he props his head in his hand or picks his head up as if it weighs a ton and drops it back to the table. Nobody can fall asleep across a table the way he does. Nobody sleeps so entertainingly or so constantly, and Brown makes it laugh-out-loud funny and absolutely real.

McConkey does an imitation of Stephen Hawking that is as spot-on as Tina Fey’s Sarah Palin, and he plays a mostly silent Jesus as maybe not too bright but very accommodating. It is their subtlety that makes Brown’s and McConkey’s acting so effective.

By contrast, it is passion and energy that stand out in the work of Wilson, Hill and Flannigan. As just one of many examples is the strange way Rachel kisses Nelson. Such a kiss has perhaps never been seen on stage. It is simultaneously passionate and mechanical, like the kiss of a love-starved robot – it seems to be an act of the possessed. Wilson is palpably confused and excited. Sylvia’s seemingly unbalanced belief that her world and the people she loves will end may or may not be literally true by the end of the play, but Flannigan brilliantly portrays a fervor that is grounded in the character’s need to keep her people safe and whole.

Beyond a strange and humorous script and fine acting and directing, there are moments of inspired presentation (such as the afore-mentioned kiss) that were surely not in the script but were dreamed up by Whitney or her cast and crew. I don’t want to describe the best of these because they are better when you don’t see them coming, but I’m sure most audience members will recognize them: the way a particular set piece is brought on stage and the brilliant choice of a particular prop.

Kudos also must go to Jill Carter for the fine video projection used throughout to ease us through scene changes.

“End Days” is a bittersweet comedy about how real people cope with real tragedy and an apocalypse that may or may not be actually looming. It pokes fun at Jews and Christians, and especially believers in the rapture, without being disrespectful to any of them.

As of press time two of the Saturday shows were almost sold out, so I highly recommend getting tickets as soon as possible.