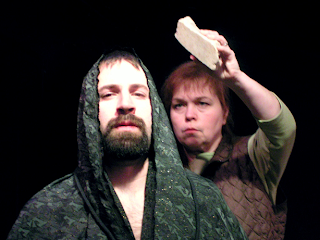 Published in The News Tribune, April 11, 2008
Pictured: Tim Samland as the ascetic and Pug Bujeaud as Sara. Photo by Marc Bujeaud

Theater Artists Olympia, the “fringe” company that produces some of the more challenging theater in the Pacific Northwest, is bringing Philip Atlakson’s play “The Ascetic” to the Midnight Sun performance space beginning tonight.

TAO boasts of “untamed theater,” which implies something that is less than polished, but this play is thoroughly polished both in the writing and in the production. The story may be improbable, but the writing is literate and beautifully structured.

Atlakson heads the Dramatic Writing Program at Boise State University. He has written, directed and acted in numerous plays and movies, including the off-Broadway production of “The Ascetic.”

A co-production with The Northwest Playwrights Alliance and Prodigal Sun Productions, this play was presented in a Playwrights Alliance reading a few years ago under the title “The Ascetic of Lincoln County,” but this will be its first full stage production. I saw it in rehearsal without costumes, sets or theatrical lighting and with actors still on book. Even under those rough conditions, I thought it was great theater.

A holy man has made the news by standing on a rock in the basalt desert of Eastern Washington for 300 days, apparently without food or water. A married couple, Jerry and Sara, travel to the desert to see this phenomenon for themselves. Immediately upon arriving on the rock in the desert where the holy man stands with his prayer rope, Jerry takes his picture, and then he asks his wife to take a picture of him standing by the holy man, treating the ascetic as if he is not a man at all but some kind of prop set in the wilderness.

Sara is skeptical. She thinks the holy man is a sham. He’s in it for the money (although she can’t figure out how he can make money out of it). And he must be sneaking food and water, stashing it somewhere among the rocks, because it is not possible to survive 300 days without food or water.

But Jerry believes the holy man is for real, a link between past and present, East and West – “our link to how unlinked we’ve become,” Jerry declares with a kind of circular logic that becomes more and more nonsensical as he tries to defend the holy man. He employs the same kind of circular reasoning in criticizing his wife with statements such as “You say things as a way of never saying anything at all.”

The presence of the holy man brings about strange reactions from both Jerry and Sara. They do things they normally would never do. Sara even seduces her husband into making love right in front of the ascetic in a scene that pushes right up to the boundary of good taste without crossing that boundary – an acting challenge that Pug Bujeaud as Sara and Tim Hoban as Jerry handle with grace, intensity and playfulness.

The ascetic challenges their reason, their marriage, their faith and ultimately (possibly) their very lives.

“I have to say, as an actress, it is the most challenging role of my life,” Bujeaud said. It is both physically and emotionally demanding. In the hands of a less skilled actor, Sara would be unbelievable, but Bujeaud’s performance seems convincingly authentic, as does Hoban’s.

The only other actors are Tim Samland as the ascetic, in what might well be the most understated job of acting ever seen in the South Sound, and Paul Gisi in a brief appearance as the sheriff.

“The Ascetic” was described in a press release as a black comedy, which may be at best a semi-accurate description. It is an intense, thought-provoking drama with moments of absurdity. I found myself wishing for a more comedic approach, especially in Gisi’s portrayal of the sheriff, but director Dennis Rolly probably made the right decision in having his actors play it as straight drama.

WHEN: 8 p.m. Thursdays-Sundays through April 26
WHERE: The Midnight Sun, 113 N. Columbia St., Olympia
TICKETS: $12 at buyolympia.com and at the door day of the show
Posted by Alec Clayton at 9:48 AM