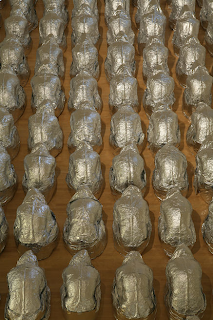 Kader Attia, featured artist at the Henry Art Gallery, University of Washington, presents work that is equally effective in terms of idea, form and emotional impact. He expresses deep sympathy for the human condition through artworks that are inventive and classically solid in design.

Massive architectural forms fill one large gallery. Called Rocher Carrés, this installation is based on a seawall made of giant blocks of concrete that lean seaward at odd angles (pictures of which are included in the exhibition). Row after row of huge white boxes made of drywall sheets fill the room. All lean dangerously to one side (apparently, not actually dangerous). Visitors can walk through as though through a labyrinth. The effect is disorienting. Some people may feel at risk of being crushed. People with vertigo probably should not enter. You feel the weight pressing down and become aware of contradictory feelings of fullness and emptiness.

The adjacent large gallery is filled with an installation called Ghosts — 199 kneeling figures positioned in rows of military precision, all facing in the same direction and bowing like Muslims in prayer. These figures are life-size. They wear hooded robes that drape open in the back as well as around nonexistent faces. The only indication of gender is the curve of their lower backs, which appear to be female. They are made of tinfoil. Seen from the front, their open hoods reveal emptiness. What does this installation say about the human condition?
Does it say we are all hollow inside? Empty supplicating robes? Does it speak to our vulnerability and longing? Does the multiplicity of almost identical figures indicate that we are programmed drones?

Both Rocher Carrés and Ghosts epitomize the artistic dictum variety within unity. They are unified through repetition of almost identical forms and through color harmony. One is all white, the other all silver. In Rocher Carrés, which is all white, even the white gallery walls and light fixtures become part of the installation. Both can be seen from many viewpoints, including a bird’s-eye view from a balcony above the galleries.

In a smaller gallery there is another installation using empty grocery bags to represent poverty. The empty bags look like empty women’s strap blouses (the handles become shoulder straps). A wall text explains that this installation was inspired by watching poor people in line at a food bank holding their empty bags. A written description cannot explain the affect of these few empty grocery bags sitting on tables.

Two other pieces in the show are an untitled stainless steel sculpture and a DVD projection video called Oil and Sugar #2. The sculpture is a giant camera aperture. The video shows what happens when oil is poured over a stack of sugar cubes. I won’t explain it further (it would be too much like giving away the plot twist of a movie). Suffice it to say it is very surprising and a powerful image.

Also showing is Seattle artist Dawn Cerny’s We’re all going to die (except for you), an installation including small drawings, bunches of little paper doll figures and even stuffed owls — plus Victorian mourning dresses and contemporary T-shirts — all of which, according to a press release, encourage viewers to “meditate on American attitudes toward death, trauma, and war in the past and the present.”

This weekend will offer the last chance to see Cerny’s installation, which runs only through April 27.