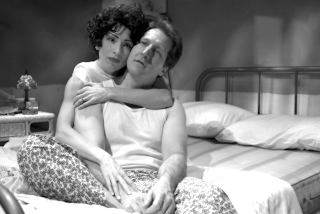 "Cat on a Hot Tin Roof" at Tacoma Little Theatre

Published in The News Tribune, April 18, 2008
Pictured: Peter Punzi as Brick and Stephanie Leeper as Maggie, photo by Jason Ganwich.


Peter Punzi made me sit up and take notice. Punzi plays the part of Brick in Tennessee Williams’ “Cat on a Hot Tin Roof” at Tacoma Little Theatre.

I’ve seen many productions of “Cat” on film, television and in community theaters from Mississippi to Washington state, and in none of them have I ever seen Brick Pollitt interpreted the way Punzi and director Nyree Martinez interpret him. Actors ranging from Ben Gazzara to Paul Newman to Tommy Lee Jones have played Brick as angry and defiant. And in many versions – especially Newman’s – I have had a hard time seeing past the larger-than-life Hollywood glamour boy to the hurt and confused man inside.

Not so with Punzi’s portrayal of Brick. He plays him as gentle, sweet, scared and damaged man whose pain was palpable. That is the way, I suspect, Tennessee Williams saw him. But when Paul Newman played Brick in 1958, audiences would not have been willing to accept a leading man who was not only sexually conflicted but as gentle and damaged in a way that might have been perceived as casting aspersions on his manliness.

Punzi doesn’t have the smoldering good looks of a young Ben Gazzara or Paul Newman, but he is a handsome man with a stocky body that is easily believable as that of the aging football hero he portrays, and he handles the Southern accent well.

Elliot Weiner also approaches his role as the blustery patriarch Big Daddy in a way that is different from what is usually expected of the role. In a play filled with exaggerated characters, Big Daddy is typically portrayed as the most outsized of them all. It’s hard to even visualize Big Daddy without picturing Burl Ives. But Weiner downplays and quietens Big Daddy, which results in a more believable and sympathetic character.

The other larger-than-life character is, of course, Maggie the Cat – memorably played as an outlandish Southern sex kitten by the likes of Elizabeth Taylor and Kathleen Turner. Actresses who play Maggie inevitably overact. In this production, Stephanie Leeper plays Maggie. And yes, she appears to be an outlandish parody of a clichéd Southern sexpot. But that is way the character was written, and if she is a cliché, we must remember that this is the character upon whom the cliché was built.

The story by now should be familiar to theatergoers. It is Big Daddy’s birthday. The family has just received word from the doctor that tests for malignancy came back positive. Big Daddy is dying of cancer. But the family tries to hide it from him, making up the lie that the tests have shown that he suffers only from a spastic colon.

Meanwhile, the second son, Gooper (Bill Read), and his baby-machine wife, Mae (Amber Rose Johnson), are conspiring to inherit Big Daddy’s vast plantation holdings and Brick and Maggie’s marriage is being ripped apart by his alcoholism and by the ghost of Brick’s best friend, Skipper. Both Maggie and Big Daddy suspect there was a homosexual element to Brick and Skipper’s friendship, but Brick denies it: “One man has one great good true thing in his life. One great good thing which is true! I had friendship with Skipper. You are namin’ it dirty!”

The set designed by Chris M. Roberson creates the sultry and decadent feel of a Southern plantation on a scorching night with storms approaching both inside and out. The effect is beautifully highlighted with Jason Ganwich’s lighting design and props by Penny Clapp and David Jerome.

“Cat on a Hot Tin Roof” is a modern classic written with superb dramatic structure and a master’s ear for language. It runs two-and-one-half hours with two intermissions. With strong adult language and themes, it is recommended for ages 14 and older.