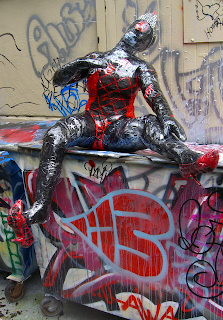 
The terms “cutting edge” and “street art” are tossed around a lot. The current show at Black Front Gallery is the real thing. These artists are like feral cats brought inside and trained — only everybody knows you can’t really train an alley cat.

OK, I exaggerate. Only some of these artists are real-deal street artists. Others are establishment artists who might have been influenced by street artists. Like Diane Kurzyna, aka Ruby Reusable. She’s been making art out of recycled materials for as long as many of us remember. And frankly, up until now, her art has tended to be more cute and entertaining than profound. She started out making silly little dolls and various clever tableaux out of Wonder Bread wrappers and other discarded materials.

Eventually she moved into making life-size and relatively realistic figures out of plastic bags and placing them in various “real life” locations such as park benches, a city bus and perched atop dumpsters in downtown alleys — all of which lends to her art a kind of gritty street cred it never had before.

Kurzyna fits right in with the “real” street artists that are showing at Black Front, some of whose names I can’t even mention because the cops are on the look out for them. I’m talking guerilla artists with tags such as "Sine," "Baso," "1+1=3," "Veks" "Slutz," "Jeans," and others. I’m talking graffiti painted directly on the gallery wall with dedications to certain other graffiti artists whose identities are known only to the select (plus — and I was glad to see this — a “tag” dedication to longtime Olympia gay rights activist Mike Cook who died of cancer a few years ago). This work is touching, colorful, vibrant, and at least some of it is gut-wrenchingly real.

Back to Kurzyna. Her figure, which sits in the gallery window, is made of reused black plastic bags from Radio Shack, Hot Topic and Metropolis. She’s wearing a red plastic-bag teddy and red "Danger Do Not Enter" shoes. On her head is a beauty queen tiara made from aluminum pop tops and wire based on E from Slutz crew (known for work on the free wall behind the Capitol Theatre in Olympia). This is the best work Kurzyna has done to date. Even the clear plastic shoes hanging overhead look much better here than when last seen in an installation inside the Capitol Theatre.

But the real star of this show has to be Adie Janci, a street artist from Chicago. I don’t know anything about this artist other than what is posted on the gallery wall. In fact, there are works in the gallery that I assume to be by Janci because of their grouping with her other works, but which, in fact, may be by some anonymous street artist. I am speaking here of the unidentified stenciled images on the left wall as you enter the gallery. These figures remind me a lot of work by Bansky, possibly the most celebrated street artist in the world (if you don’t know him by now, that’s why God invented Google). The most outstanding of these figures is a stenciled picture of two little girls sitting on high stools — and I’m talking really, really high, almost ceiling high. The girls are dangling a baby on puppet strings. There is a graphic quality to these images that is hard to describe but which I find fascinating, and the combination of sinister imagery with childish innocence is powerful.

In a wall statement, Janci says her street art in Chicago consists mostly of long, white legs that she cuts out of paper and attaches to walls. There are a few of those here, attached at ceiling level. There are also two walls filled with little drawings and paintings that feature these same long white legs, many in combination with yellow bicycle wheels and one large group of circus-motif paintings.

I don’t believe Janci is a self-taught outsider. This is art that shows a highly trained touch with line and color and a sophisticated feel for distribution of space.

Set against the back wall are two pieces by Joe Penrod, who has shown at Black Front previously. Penrod places real items next to walls and “paints” their cast shadows with blue masking tape. Here he has two stools stacked one atop the other and a bucket filled with wood scraps, both with long blue cast shadows. They are striking images.
The smaller back room gallery features an installation by Laura Sharp — three walls densely packed with drawings, paintings, photographs, and various found or handmade items all interspersed with dated news clips. It is like a scrapbook of a young life lived in difficult times.

The stencils are NOT by Adie, in fact, that whole wall was covered in those spray painted stencils (this is what happens when you let vandals take over a gallery) but Adie had them painted over, and only the puppet baby remained. Sine, the artist responsible for the stencils, came back on Friday afternoon and proceeded to stencil some more, including the figure behind the door, in the gift shop room, and above the figure in the window. He is the artist who has done the Dali Llama at the Free Wall. Adie's does the leg project.

Thanks for posting a comment. I depend on people like you keeping me informed. So, apparently the show has changed since I saw it last week. I'll have to stop by again and see how it looks now.