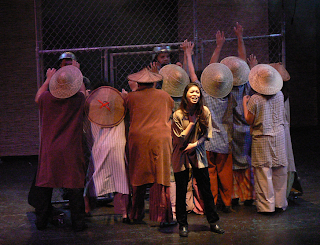 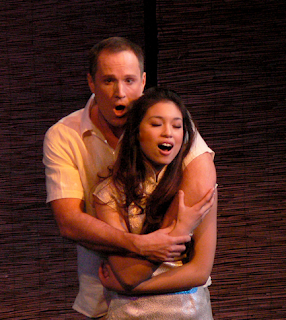 The musical “Miss Saigon” is among the saddest ever written. With the exception of two brief moments of comic relief provided by the Engineer (played with great style by Micheal O’Hara), this Tacoma Musical Playhouse performance is one of unremitting tragedy, longing and horror.

In its melancholy and its broad sweep – and especially in the tone and the power of the music by Claude-Michel Schnberg, with lyrics by Richard Maltby Jr. and Alain Boublil – it bears a striking resemblance to “Les Misérables” – so much so, in fact, that when the lovers Kim and Chris broke into song I thought I was listening to Eponine and Jean Valjean from the touring company of “Les Misérables. April Villanueva as Kim has Eponine’s beauty and vulnerability and a similar hauntingly stunning clear and sweet voice, and Aaron Freed as Chris has Jean Valjean’s vocal range and power, plus a whispery quality on the more tender ballads that is as gentle as the whimper of a hurt child.

Where it differs from “Les Misérables” is in its lack of heroic grandeur.

There are no heroes storming the barricades; rather, there are flawed human beings whose weaknesses have tragic repercussions.

The story is set at the end of the Vietnam War.

Kim is a poor girl who comes to Saigon after her parents are killed and her village is destroyed, and she has reluctantly turned to prostitution.

She is 17 years old, shy and afraid. She joins a group of bar girls who work in a club called Dreamland owned by the Engineer, a small-time hustler who, like all of his girls, dreams of a better life – his dream being escaping to America before Saigon falls to the Viet Cong.

Chris and his buddy John (Scott Polovitch-Davis) come to Dreamland, and John buys his buddy Chris a night with Kim.

Chris and Kim fall in love that night and cling to each other as they sing a classically tender duet, “The Last Night of the World,” which nods to the world swirling in horror around them and the love they believe can outlast it, and Chris promises to take her home to America with him.

But when Saigon falls and the Americans are lifted off the roof of the embassy into helicopters to be transported home, there is a mad and desperate scene with Vietnamese clamoring at the gates to get in.

Soldiers inside the embassy will not let Chris go out to get Kim, nor will they let her in.

Skip ahead a few years after the war’s end.

Chris is back home in America and has married Ellen (Julie Watts) after a long and painful adjustment to life in the United States; Kim is again trapped in the life of a bar girl, but now with Chris’s son, Tam (played alternately by Bryan Goodnite and Peter Belen); and John is working on behalf of the Bui-Doi children born to American soldiers and Vietnamese women during the war. (One of the most heart-rending songs in the play is John’s solo “Bui Doi,” sung to a backdrop of pictures of these children.)

Kim’s life with her child in Vietnam is hopelessly bleak. Yet she clings to the belief that Chris will do as he had promised and come back for her and the son he did not know about.

The comedic relief provided by the Engineer are the songs “If You Want to Die in Bed” and “The American Dream.” The former provides necessary transition with sly humor and the latter is a big Broadway-style production number sung with great panache by O’Hara and backed up by a chorus line of bar girls in stars-and-stripes costumes and a sexy Lady Liberty.

The costumes by Joan Schlegel are nicely done, especially the Engineer’s bad-taste ’70s outfits, and the set transitions are smooth and unobtrusive.

“Miss Saigon” is a long play at two hours, 30 minutes plus a 15-minute intermission, and it is emotionally draining. With adult language and themes of prostitution, it is not recommended for children under the age of 13. There are helpful parental guidelines on the Tacoma Musical Playhouse Web site for those parents who may be undecided about taking their children.