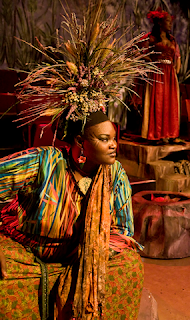 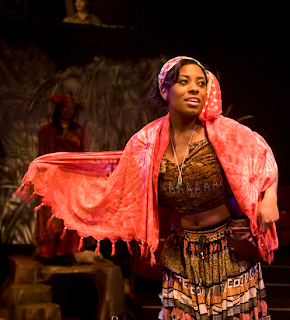 
The Stephen Flaherty and Lynn Ahrens musical “Once on This Island” at Lakewood Playhouse combines Caribbean folk tales with a love story reminiscent of “Romeo and Juliet” told through song and movement.

Unlike the majority of contemporary musicals, there is almost no dialogue; the story is presented in an abstract and symbolic manner, almost like ballet or opera.

All movement is dance in this production, which has the feel of an elaborate musical on a grand scale despite the intimate in-the-round space and simple props and sets.

This is Julie Halpin’s directorial debut at Lakewood Playhouse. She comes to this production after almost 40 years heading the drama departments at Washington and Curtis High Schools and brings with her experience in dance, choreography and mime. I mention this because it shows in the choreographed movement of the actors wherein even the most insignificant movement away from the central action is presented as a kind of stylized mime performance (credit also choreographer Katie Stricker). Unfortunately, with so much attention to movement, some of the less choreographed jockeying for positions between scenes becomes a distraction. But that’s a minor quibble.

Island legends and the love story of Ti’Moune (Ashley Jackson) and Daniel Beauxhomme (Adrian David Robinson) are told by a chorus of island storytellers (many of whom play double roles) and by the native gods and goddesses: Agwe (Eddie James), God of Water; Asaka (Jamelia Payne), Mother of Earth; Erzulie (Tena DuBerry), Goddess of Love; and Papa Ge (Jeffery Brown), Demon of Death.

In the beginning there is a terrible storm that kills many of the island inhabitants, but the gods save the young child Ti’Moune (played by six-year-old Jade Cooper) by placing her in the top of a tree. Her adoptive parents believe the gods have saved her for a reason but they don’t know what that could be. Years later when Ti’Moune grows up and prays for love, the gods bring her Daniel, son of Armand (Alex Domine) who comes speeding through her side of the island and wrecks his car, and is almost killed in the accident. Ti’Moune and Daniel fall in love – to the shock of her parents who are afraid of the taboo they would break by being together, but he abandons her, returning to his side of the island even though not yet recovered from the accident. Against the advice of her parents, Ti’Moune sets out to find Daniel, nurse him back to health and recapture their love in an adventure that becomes a pitched battle between love and death.

It is a dark story that does not end well in the time of the telling, but which sets the stage for happier times of healing in the future, as exemplified by the uplifting final anthem “Why We Tell the Story” – a song of hope and healing reminiscent of “We Are the World.”

In the lead role as Ti’Moune, Ashley Jackson stands out primarily for her acting and graceful movement, and Robinson’s energetic dance movements simply take the breath away. Physically they are perfectly cast as the beautiful and tragic young lovers, but they are neither the best singers nor the most dynamic characters in this play. Those honors go to the gods and goddesses played by Payne, DuBerry and Brown.

One of the strongest singers is Payne, a grand Mother Earth. She spends much of the evening standing on rocks in front of a waterfall wearing a majestic headdress and singing with powerful bell tones. Her comforting song, “Mama Will Provide” is one of the solo highlights of the play. The second of the strongest voices is that of DuBerry as the Goddess of Love. Her solo on “The Human Heart” is one of the more haunting moments in the play.

But the most undeniable presence on stage is that of Brown as the big-voiced, menacing Demon of Death.

Also outstanding in this production is Domine, a senior at Steilacoom High School who (as storyteller and father to Daniel) already looks like a seasoned professional actor.

Filled with darkness, mysticism and death, it is hard to believe that this musical was based on “The Little Mermaid” and was written by the creators of “Seussical.” But it was, and despite some of the heavier moments, it is essentially light entertainment.