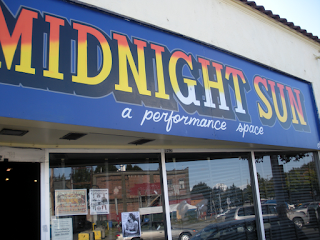 Prodigal Sun Productions, which operates The Midnight Sun Performance Space, is seeking to raise money so that it can continue to provide an all-ages, low-cost, performance venue available to the Olympia community.

The Midnight Sun opened in 1991 and has been host to numerous performances over the years including: rock shows, theater productions, student plays, artwork, readings, vaudeville shows, storytelling concerts, dances and performance art.

On Sunday, Feb. 26, the Sun will kick off the first in a series of fundraisers featuring storyteller Elizabeth Lord and local bands:  Hey Girl, Morgan and the Organ Donors, Hungry Heart, Happy Noose, Mongo, plus a special guest to be announced.

In addition, Prodigal Sun is seeking interested parties who would like to join the organization and become a volunteer board member and help shape the future of the Sun. They are also seeking partnerships with other performance organizations who would benefit from having a home venue.

Contact: Elizabeth Lord at elizabeth-lord@hotmail.com or by telephone at 360-250-2721 for more information or to learn how you can help.
Posted by Alec Clayton at 8:55 AM