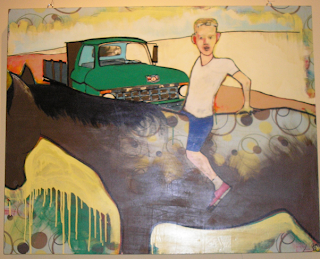 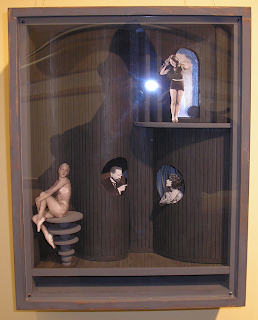 Gold we have Spun from Straw at Olympia’s Washington Center for the Performing Arts
The Weekly Volcano, February 8, 2012

Especially big is a piece by Bil Fleming and Christine Malek called "Polyethylene Fiend." It's a giant dragon made of used plastic bags and packing materials, bamboo, packing tape, thread, a bath exhaust fan and annealed wire. The piece is also referred to by Fleming in an email as a "Hydrocarbon Leviathan" or a "Petrochemical Problem."

The dragon is huge (45' x 20' x 4') and colorful. It looks like something that should be carried through the streets by a dozen people in costume at a Chinese New Year's celebration or at Olympia's Procession of the Species. The dragon fills the stairwell. Its tail wraps around the railing on the upper balcony and its face almost touches the floor of the ground-level lobby. It is so big that you cannot see the whole thing from any one point of view.

Making "Polyethylene Fiend" must have been a huge undertaking, and it is fun to look at; but sorry, folks, I just can't call it art.

In addition to the big dragon, this show features selected works from Matter Gallery artists. I'm tempted to say Matter owner Jo Gallaugher has picked the cream of the crop, but it may be more accurate to say she has selected the pure art and left out the craft and utilitarian art. No lamps or coat racks or any such, just paintings and sculptures made from, mostly, recycled materials.

It's too big a show to mention even half the works, so I'll comment on the very few that most excited me.

I'll start with George Kurzman's "Field Trip," is a painting of a boy riding a horse. Behind the horse is a bright green truck. The circular swirls on the horse's back resonate beautifully with similar patterning in the sky and the lower ground. This is a nicely executed painting. It reminds me a lot of paintings by Gaylen Hansen.

Max Wade's "Stage of Life" is a shadow box with cut-out figures from magazines posing on a stage made of what appears to be wood or cardboard. The figures are in black and white and look like they come from the 1950s and earlier. The stage setting is clean and stark. I like the nice asymmetrical balance and the way the figures look at each other. The whole piece is very elegant.

Nancy Thorne-Chambers' "Princess" is a cute and haughty little porcelain woman gold leaf with a crown made of found metal objects that look like some kind of nails and fasteners. It's a delightful piece.

"It's All Mine" by Roxanna Groves looks a lot like a Red Grooms painting. It's an assemblage made of found materials. There's a big, black dog wearing a neckerchief in front of two yellow chairs and a throw rug, with a shelf of found objects in front. The drawing and color are excellent and there is an intriguing play back and forth between illusionary space, flatness, and actual three-dimensionality.

This show is absolutely worth seeing.


Fridays 11 a.m. to 1 p.m. and by appointment
Washington Center for the Performing Arts, 512 Washington St. SE
Olympia
Posted by Alec Clayton at 1:49 PM