‘Suite' actors show off their chops 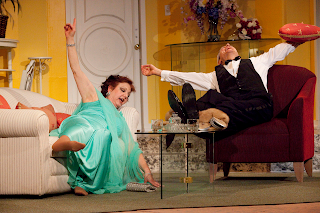 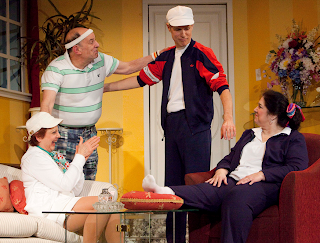 
Read more here: http://www.thenewstribune.com/2012/02/10/2020088/cast-generates-controlled-chaos.html#storylink=cpy
The cast of Neil Simon’s “California Suite” at Tacoma Little Theatre is better than the script. Five actors play 11 different characters in four scenes, each scene a different story related only in that each story takes place in rooms 203 and 204 of the Beverly Hills Hotel in Los Angeles in 1976.

Walworth-Horn is, to my knowledge, a newcomer to the stage. She is on the TLT board of directors. I’ve never before seen her act and there are no acting credits for her listed in the program, but she does a fine job with a role with no speaking lines. Instead, she is drunk and passed out throughout the entire scene she is in. The other four actors are all seasoned veterans, and their acting chops are on full display as they play a variety of quite different characters.

Most of the jokes are fairly sophisticated and urbane, especially in the scenes with Aleman and Duke, whose characters try too hard to be droll. The various scenes go from witty banter that verges on boring; to slapstick insanity in the second scene; to more urbane wit in the third scene, which devolves into spiteful bickering before ending up in sweetness; and finally a big farce of a final scene with the two couples fighting each other in slapstick mayhem.

In the first scene, Aleman and Duke are a divorced couple arguing over who should have custody of their 17-year-old daughter. Aleman plays the wife as a big phony New Yorker, full of airs and haughtiness. She’s outstanding. Duke plays the husband as a more down-to-earth and honest person who is fed up with his ex’s pretensions.

The second scene opens with Weiner waking up in the hotel room with a hooker passed out in his bed, and his wife on the way up to the room after arriving in Los Angeles. He desperately tries to get the hooker out of bed, but can’t wake her, so he tries to hide her from his wife, carrying her from bed to closet and back like a comatose rag doll. I’ve admired Weiner in quite a few dramatic roles, but never seen him do such physical comedy. It’s like a scene out of a Marx Brothers movie.

The third scene bothered me. The couple from London, Aleman and Duke again, have come to L.A. for the Academy Awards. She’s an actor up for an Oscar. He’s a bisexual antique dealer. It’s never quite clear until the end of the story whether theirs is a marriage of convenience or if they truly love each other. Their sniping at each other is vicious, and I found this scene tedious, although the acting was good and there was some witty dialogue.

The final scene goes back to pure slapstick with the two couples fighting outlandishly. Credit fight coach Mark Peterson and all four actors for a brilliant job of creating controlled chaos.

If you’ve seen Simon’s “Plaza Suite” and liked it, you’ll like this one too. Both Simon plays use almost identical set-ups, and both are entertaining, but not great scripts.