"Dawn of 2012" impresses at Fulcrum Gallery 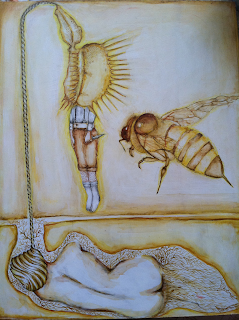 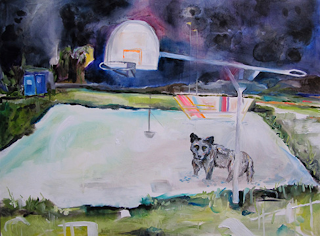 Pictured, top: "Venus Garden" by Kelsi Fillo-Finney and, bottom: “I’m as lonesome as you are and feel more empty every day” by Kirsten Marie Pisto


There's quite a range of imagery and styles in the new show at Fulcrum Gallery, Dawn of 2012. The show features emerging artists - a loosely defined and often over-used term that generally means artists who have not yet received the recognition they deserve. Some of us are emerging all of our lives.

But in this case the artists truly are emerging. Some of these artists have never before had gallery shows. They're young, innovative and exciting. Surrealistic and pop imagery abounds, and there is an interesting variety of media, including repurposed materials.

One of the most exciting works is Gabriel Brown's "Floating Islands Estates," a surrealistic city of floating houses suspended from fluffy clouds. This amazing otherworldly creation hangs from the ceiling and occupies most of the air in the front room. It's definitely the first thing you notice upon entering. Hanging beneath cotton-ball clouds from monofilament lines are what look like upside-down cliffs or stalactites made of dirt with flat, grassy tops. Sitting on top of each is a little matchbook-size house made of cardboard. The cardboard is cut from packages with the advertising intact. It's easy to spot the commercial logos or parts of logos from such brand products as Arm & Hammer baking soda and Scotch-Brite.

One of the more intriguing things about this work is that the houses and the stalactite-like pieces of ground they sit on look very much like paintings by Jeremy Mangan - so much so that I wonder if they are an intentional homage.

Other remarkable works in the show include a series of fantasy images in gouache, watercolor and colored pencil by Kelsi Fillo-Finney, all in tones of yellowish brown on white. These include a self-portrait with a cascade of strawberries in her hair, the head of a deer wearing a man's suit, a man with mushrooms growing out of his head, and - best of all in a very macabre way - one called "Venus Garden," that pictures a naked woman on the floor with her back to the viewer, something like veins growing out of her body connected to a giant floating valve or organ, with a huge fly and a hanging man in the sky.

Meghan Mitchell has a group of five graphic drawings in the show that are very sensitively and delicately executed. The finest of these is a silhouetted woman's hand hovering over a softly textured cloud-like shape, described in the wall text as a "night sky or placid nighttime ocean." There's a lovely interplay of positive and negative space in this one.

Also showing are paintings by Branden Urban that remind me of early 20th century political posters and some very large and ambitious surrealistic pop paintings by Julian Pena. And paintings and sculpture by Kirsten Marie Pisto also left an impression, most notably the strange oil painting "I'm as lonesome as you are and feel more empty every day," which ranks with Brown's "Floating Islands Estates," as one of the best thing in the show. Pisto's bizarre painting is like a modern suburban myth in beautifully watery paint.

Not all of these artists are technically sophisticated. I'm sure each has some growing to do in order to find themselves as artists. But there is admirable honesty and inventiveness in all of these works of art.
Dawn of 2012