Murder and laughter
TAO presents “A Bucket of Blood”
Olympia’s most outlandish theater troupe is at it again. Theater Artists Olympia is doing an adaptation of Roger Corman’s cult horror film “A Bucket of Blood.” 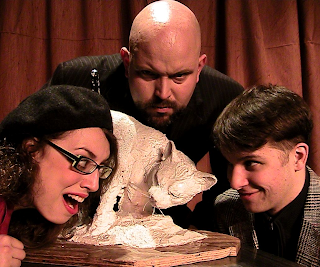 Sam Cori, Morgan Picton and Mark Alford as Walter Paisley
in "A Bucket of Blood" - photo by Dave Beacham
Olympia’s ubiquitous theater superwoman Pug Bujeaud adapted it from the film (thanks, Molly Gilmore
for the term “ubiquitous” in relation to this production). She — Bujeaud, not Gilmore — writes in the program notes about how it came to pass:
A little over a year ago I got a phone call. “Mom, I just watched this old Roger Corman movie, it’s really good… and it’s public domain.” I could hear the smile in her voice. “We need to do this.”
I love all kinds of films, but I have a special place in my heart for a B movie that rises above it’s constrictions and becomes something amazing. (Great analogy for TAO itself don’t ya think?) And on first viewing I knew I agreed with my daughter Sarah and there was a big plus, it was set in the ‘50s, and I just plain love the beats.
Adapting a film to the stage is not easy — especially when the stage show has to be done on an extremely limited budget — and this was director Bujeaud’s first attempt at writing a film adaptation. She did an admirable job, and so did her cast and crew. This play has a large set that “revolves” and moves, and elaborate props including life-size sculptures of animals and people. It begs for a big-budget production, even though the film was low-budget; and TAO, although professional level in their skills, money they have to spend on a show is extremely limited.
It is a bloody, creepy lampoon of a 1950s horror film. (Corman was famous for such B horror flicks as “Swamp Women” and House
“House of Usher,” and he lampooned his own work in “Bucket of Blood” and “The Little Shop of Horrors.”) Laughs are guaranteed.
The cast is large, with 16 actors. Mark Alford is the main character, Walter Paisley, a nerdy young busboy who longs to be a famous artist. He is outstanding. Alford directed TAO’s previous production, “The Hound of the Baskervilles.” This play marks the first time I’ve seen him act, and believe-you-me, he is a major talent. His comic timing is precise (you can also credit Bujeaud’s directing for some of this), and his ability to suddenly and believably change from a nervous kid to an obnoxiously proud artist to an insane stone cold killer is amazing.
Outstanding supporting actors include Ryan Holmberg, who recently wowed audiences in Harlequin’s “The Love List,” as Maxwell Brock/Frankie — the quintessential beat poet, Kerouac with an attitude problem; and Sam Cori as the artist-as-hero worshipping Carla. A recent Evergreen State College graduate, this is Cori’s first performance in a TAO production. Previously she’s been seen mostly in college productions and shows with children’s theaters. Cori is an actor to watch. She’s also a great singer. Her styling on “Fever” is wonderful. (This is not a musical, but it takes place in a coffee shop with a stage and there are two musical performances, the one by Cori and a folk song by Marko Bujeaud.)
Heather Christopher, Bonnie Vandver and Tom Sanders are fun to watch in brief but critical roles as, respectively, a beatnik sexpot, and frumpy landlady and a cop. Christine Goode and James Bass add color as spaced-out beats. Goode is especially fun to watch when she flirts outrageously with Walter, a scene reminiscent of her sexy comic antics as LiAnne the horse in “Cannibal! The Musical.”
Jodi Hooper has one great scene toward the end as Dorthea Popavich the art collector’s wife.
Seeing the plaster statues of animals and people is worth the price of admission. They are like sculptures by the great Pop artist George Segal. Kudos to Michael Christopher, Heather Cantrell and Chris Cantrell for outstanding work on these statues.
When: Thursday through Sundays through Feb. 25 and March 1-3 at 7:30 p.m., March 4 at 2 p.m.
Where: The Eagles Club Underground, 805 Fourth Ave. E., Olympia
Tickets: $12
More information: olytheater.com or brownpapertickets.com
Posted by Alec Clayton at 10:11 AM