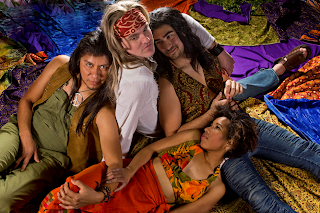 Something big happened in the last years of the 1960s. It wasn’t just sex, drugs, and rock and roll, and it wasn’t just the anti-war movement and civil rights. It was the gestalt of all that and more, an attitude shift that lives on today despite many reactionary set-backs and despite the realization that the dawning of the Age of Aquarius might have been an unattainable pipe dream.
It’s good to be reminded of those days, and nothing does that so effectively and joyfully as the rock musical “Hair,” which was revised on Broadway two years ago. It is now playing in Olympia at Capital Playhouse. “Hair” was groundbreaking in its day, the first ever rock musical and a forerunner to such plays as “The Who’s Tommy,” “Jesus Christ Superstar” and “Rent.”
The Capital Playhouse production captures the feel of the era. From the moment you walk into the theater you are drawn back to 1968. Musical Director Troy Arnold Fisher, his hair grown long and wearing a tie-dyed T-shirt sits inside the front door with a couple of musicians playing, drumming, and singing songs from the time. Theater staff and some audience members are there in ’60s garb.
“Hair” is a joyful ode to optimism in the face of war and bigotry, and it does not shy away from some of the harsher aspects of the day such as the macho denigration of women which was still rife at the time and which is exemplified when Berger slaps his girlfriend, Sheila, who takes it in stride because that was what many women did back then.
In traditional theatrical terms the play is weak. The story line is almost non-existent. But it’s not really about the story. It’s about the rebellious and celebratory spirit of the day, band it’s about the music. Oh, and what music it is — beautiful, touching ballads, hand-clapping rock and roll, and lyrics that range from clever and funny to heart-wrenching.
The young cast — none of whom were even alive when “Hair” first burst upon the scene — is excellent. Jacob Hoff is manically intense and energetic as Berger. Bruce Haasl portrays Claude as Christ-like but with a wicked sense of humor and conflicted emotions. Jeff Barehand, an east coast transplant and newcomer to Capital Playhouse, is thoroughly engaging as Woof. Bailey Boyd dances with the energy of a whirling dervish and sings angelically. Anjelica Wolf plays Sheila with sincerity. Her singing on the haunting ballad “Easy to Be Hard” and the beautiful and rousing “Good Morning Starshine” is wonderful. Her voice is clear and mellow. Rochelle Morris sets the tone when she takes the lead on the opening tune, “Aquarius” with a voice like a whole brass section. And Matt Flores is wonderfully funny in drag in a lampoon of Margaret Meade.
The songs in “Hair” have been called a laundry list, and it is true that they contain many lists. “Sodomy” is a list of sexual acts from cunnilingus and fellatio to pederasty, the latter of which should never be included in a song celebrating sexual acts. “Initials” is a list of initials such as LBJ and LSD. And “I Got Life” is a list of body parts: “I got my hair, I got my head, I got my brains, I got my ears…”
The Margaret Meade skit is one of two comical interruptions to the main action. It is entertaining, and Flores does a great job of acting and singing. The other comical interruption is a slog. It’s a very regrettable series of comic skits involving famous historical characters and stick ponies and masks that an overdone psychedelic hallucination scene that is clichéd and overdone. This interlude drags on through numerous songs with Claude, all the while, striking dramatic poses in the background. It’s not funny or particularly entertaining, and I wish it could have been drastically cut or even left out completely, but there’s such a thing as copyright law; you have to play the play the way it was written, with the exception of works in the public domain.
On the up side, each of these comic interludes sets up marvelous songs. The Margaret Meade bit ends with her asking Claude why he’s such a hairy guy, which leads into Haasl’s terrific rendition of the title song, and that other strangely psychedelic interlude sets up the brilliantly written anti-war anthems “Three-Five-Zero-Zero” and “What A Piece of Work is Man.”
Director Heidi Fredericks reminds us in her program essay that many of the lyrics were inspired by great works of literature. The writers and original stars of the show, James Rado and Gerome Ragni, drew from “Hamlet” for “What a Piece of Work is Man,” and “Three-Five-Zero-Zero” is based on an Allen Ginsberg poem. (The number represents the number of North Vietnamese killed each month during the war).
The themes of the show are drugs, sex, love, rebellion against outmoded morality, and perhaps surprisingly, it is very religious and patriotic. All of these themes are handled explicitly and unapologetically.
Parts of “Hair” may be dated and some of the pop culture and political references may be lost on today’s younger generation, but the spirit is intact, the energy is infectious, and the singing is great.
When: 7:30 p.m. Thursday-Saturday and 2 p.m. Sunday through Feb. 18
Where: Capital Playhouse: 612 Fourth Ave. E., Olympia
Tickets: $28-35
More information: 360-943-2744, capitalplayhouse.com
Posted by Alec Clayton at 10:02 AM