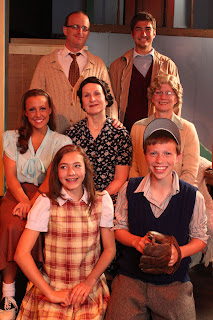 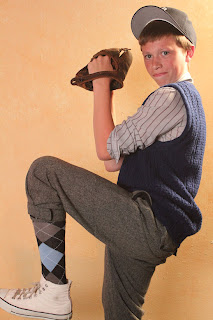 I may be the last person in Olympia to point out that Capital Playhouse is venturing into non-musical productions for the first time since their opening season in 1988.

The near death and resurrection of Capital Playhouse has been given a lot of press, as well it should; it is a South Sound institution that should not be allowed to die.

The playhouse begins its 2011-2012 season and its new experiment in scheduling two non-musical plays a year with the popular Neil Simon hit, “Brighton Beach Memoirs.” It’s a great choice not only because Simon is one of America’s most popular playwrights but because nothing draws a crowd like nostalgia and humor, and “Memoirs” is ripe with both. But this play is not just a comedy. Like many of the best contemporary plays it interweaves comedy, tragedy and drama so skillfully that it defies categorization.

The Capital Playhouse production of this play is so good that you’d never suspect they haven’t done non-musicals in well over 20 years. And the cast – a mixture of familiar faces and newcomers to the area – is outstanding.

Jackson Jones in the leading role of Eugene Morris Jerome is a child actor with outstanding skills. He throws himself into the role with conviction and a bit of sly humor. He doesn’t overwork the humor but lets it shine through his natural depiction of the character (a 14-year-old playing a 14-year-old in contrast to the adult Matthew Broderick, who originated the role on Broadway). In this part Jones reminds me of a couple of other engaging child actors: Clarke Hallum, the Capital Playhouse Kids at Play veteran who wowed audiences at Seattle’s 5th Avenue Theatre in “A Christmas Story” and Wil Wheaton as Gordie in “Stand By Me.”

Eugene narrates the story of an extended Brooklyn family struggling through a slew of personal crises during the Great Depression. It is 1937. Young Eugene is a baseball fan who wants to become a writer and figures he’ll play for the Yankees if he can’t make it as a writer (and the Red Sox if the Yankees don’t want him). His constant obsession and heartfelt prayer is to be able to see his cousin Nora (Megan Tyrrell) naked for just two-and-a-half seconds.

Eugene’s father, Jack (Ted Ryle) has just lost a sorely-needed second job and is a heart attack waiting to happen, and his mother, Kate (Carol Richmond), is struggling to hold the family together.

Eugene idolizes his older brother, Stanley (Jacob Hoff) who, despite being only 18 years old, is forced to become the family’s breadwinner when his father gets sick.

Aunt Blanche (Kathy Kluska) and her daughters Laurie (Kate Anders) and Nora have been living with the Jerome family since Blanche’s husband died many years ago. Personal resentments between Blanche and Kate have been silently steaming for a lifetime, and everyone tip-toes around sister Laurie because she has a heart flutter – which both Eugene and his father suspect is not a real condition or it is a condition that could be cured if everyone would just quit spoiling her.

The boiling love, hate and resentments between these complex family members provide great fodder for both drama and comedy. The play is peppered with wonderful comedic scenes – the funniest of all being when Eugene and Stanley talk about whacking off – and personal confrontations both devastating and touching. Their lives and their feelings for one another are multi-layered and complex.

Hoff plays Stanley as a smoldering and conflicted but very sweet young man. He reminds me of a younger version of another Stanley, Kowalski, in “A Streetcar Names Desire.” My friend Keith said Hoff reminded him of Brando, and I can definitely see that. He has the same kind of controlled intensity and even looks a little like the young Brando.

Kluska and Richmond convincingly portray the tension between the sisters. To Anders falls the difficult job of emoting quietly in the background while others take center stage, and she handles it well, especially in the way she silently reacts to conversations between Eugene and Stanley overhead through the thin walls of their adjoining bedrooms.

Ryle is outstanding as the father. When he is winded and exhausted from carrying a heavy load (both metaphorically and literally), you feel his exhaustion, and his sympathy toward his children and his nieces is palpable. In the beginning of the second act we learn that Jack has suffered a heart attack, and when Ryle next appears in the role of the recovering Jack you can sense in his walk and in his voice his weakness and determination. This is consummate acting.

Tyrrell, recently seen at Stage Right in Seattle and in Harlequin Productions “Stardust” series, is expressive as Nora, a youth on the cusp of adulthood. She nicely balances teen angst and maturity.

Like many people who enjoy widespread popularity, Neil Simon is often much less popular with the critics than he is with the public. But there is some excellent writing in this script. The comedy is insightful and timeless, and his depiction of family life is as realistic and dramatic as Tennessee Williams or Israel Horovitz. (There are clear similarities between this and Horovitz’s “Unexpected Tenderness” which recently played at Harlequin Productions and, incidentally, also starred Jones.

My only problem with Simon’s writing in this one is the long arguments in the middle of the second act, first between sisters Kate and Blanche and then between Kate and her teen daughter, Nora. Those scenes could have been improved greatly by a little trimming. Minus that one slight problem, this play is great. It is suitable for teens and adults but probably not for young children.

The direction by Bryan Tyrrell is excellent. Set designer Bruce Haasl does his usual excellent job, creating a homey Jerome household, and the lighting by Matthew Lawrence is warm, natural and unobtrusive. The period costumes by Emily Popp looked authentic.

It makes me happy to see Capital Playhouse branch into something beyond musical theater.