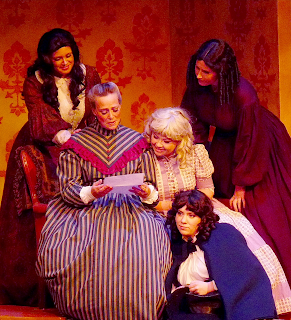 
With “Little Women, the Broadway Musical,” Tacoma Musical Playhouse has managed to dress up a weak property with some outstanding singing, sporadic doses of good acting, and very respectable production values. Costumes are attractive and convincing, the set is both clever and effective, lighting is unobtrusive, and the music is solid and substantial, though it does wander into the realms of “too loud” and “out of tune” more often than is ideal.

The musical itself is a meringue; a sweet, light dessert with no real substance. You get two and a half hours of wallowing in very pleasant and unchallenging songs with little in the way of plot, set-up, resolution or much of anything that evokes emotional commitment. It is light fare in its truest sense.

The music consists of songs that sound more alike than different. In fact, they mostly reminded me of the song Belle sings as she breezes through town in the opening of Disney’s “Beauty and the Beast.” This is not great or enduring composing, nor songs that wrench the emotions. On the other hand, it is certainly pleasant enough to listen to. Think of it as an “easy listening” musical.

I trust you know the basic story; it’s Little Women by Louisa May Alcott. Set both in Massachusetts and NYC during the latter half of the Civil War, it is less a progression of events than a window into the lives of women of that period. Told by the eldest, it is the story of the four March sisters coming of age and seeking mates, or in the case of Jo, a career. Surrounding them are their mother, their rich neighbor and his nephew, their wealthy aunt, and their various suitors.

As is often the case, it seemed the cast was chosen for singing ability rather than acting skills. Jo (Brynne Geiszler) is the eldest, a tomboy who’d rather become a writer than a prim lady or wife. She’s the main character of this tale and narrator of the ones she writes. Her singing is beautiful, pitch perfect and strong, backed by expressive and energetic movement. In short, she’s just about perfect on stage, until she stops singing. Unfortunately, her acting lines between songs are often delivered in an almost sing-song cadence, as if she can hardly wait to get back to singing.

She and the supporting cast are at their absolute best when they sing and act out Jo’s fictional stories, which happens in both the first and second acts. As she belts out the story in song, she acts it out as well. Each of her actions is mimicked simultaneously with flawless coordination by actors portraying her fictional story’s characters. They are seen through a rear lighted scrim cleverly hidden in the center section of the set, an effect that gives the image of watching a dream sequence.

Marmee, their mother (Nancy Hebert) and Professor Bhaer (F. James Raasch) both brought an impressive combination of top notch acting and equally good singing. Their neighbor Laurie (Bryan Gula) was also a better actor than most, though admittedly not as strong a singer. Then, of course, there is the redoubtable Sharry O’Hare, whose skilled acting and powerful stage presence, as always, burst forth at every entrance to create a perfectly crafted Aunt March.

The set design by Will Abrahamse is particularly clever. Three separate rotating segments with various additions and furniture quickly create a range of simple yet convincing sets. Copious musical support is provided by a 13 member pit orchestra led by musical director Jeff Stvrtecky. Lighting (John Chenault,) including a clever gobo that projects the time period of each scene on a side of the proscenium, was well done and suitably subtle.

Bremerton Community Theatre and Marianne Taylor take credit for costume design, which was mostly very attractive and period appropriate, with a few glitches and anachronisms. Amy’s dresses, for instance, which at first were hand-me-downs, looked appropriately ill fitting, but did not get much better once she got her own stylish designer togs. Jo unzipped a dress on stage, blithely unaware that zippers would not be available for another 30 years.

All in all, with some less than stellar acting and more than stellar singing, it’s a pleasant enough musical. You won’t go home humming any brilliantly catchy songs, nor exhausted from emotional release, but you will have spent an entirely enjoyable evening.

Had you done the appropriate research Mr. Clayton you would know that Meg is actually the oldest of the March sisters, the "clever gobo" projecting the date on the sets were actually two projectors running a powerpoint program, and your assesment of the acting in this show couldn't be more wrong.

1. I didn't write this.
2. I never understand why people who post critical comments never use their own names.

Alec: As you probably know Joan Schlegel, a very talented costume designer at TMP died in August.
Margo Webb and I assisted Joan for several years. However, we worked very hard on the costumes for CATS.
We also worked long hours on the costumes for Little Women. Many of them where pulled from TMP's costume department, altered and embellished by Margo and I. Some costumes were borrowed from Bremerton but I don't know Marianne Taylor, she was not working with Margo and I at TMP.
Margo and I are not looking for KUDOS the cast were all very appreciative and that was important to us. They were also wonderful to work with. Your reviewer was incorrect re the costumes and other aspects of the musical. Grace Stone