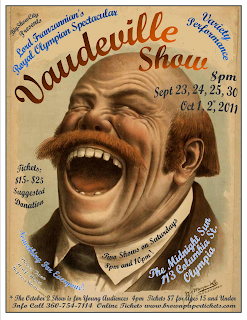 This past Friday night was the muggiest night of the year in Olympia. The heat in the downtown Midnight Sun Performance Space was almost unbearable during the sold-out performance of Lord Franzannian's Royal Olympian Spectacular Vaudeville Show. The only thing hotter than the humid night air was the show on stage.

From Elizabeth Lord’s story of a milkman named Harvey – illustrated by fast-draw artist The Great Sylvester Simon – to Nani Poonani’s hot burlesque performance, to Lauren O’Neill’s reading of a letter of complaint to “Hmmmm Foods” – to the inimitable Vaude deVille, it was one hell of a show.

Earlier that afternoon I had mentioned to a friend that we were going to a vaudeville show, and my friend had two interesting responses: first, she said she didn’t know there was vaudeville in Olympia, and then she said, “I wish we had burlesque.”

Well guess what, Olympia – we have both. They’re both outstanding, and Lord Franzannian combines them in “his” fifth annual show. It’s a shame that only a handful of dedicated fans even know about this spectacular event. It should be more widely promoted and should fill major venues the likes of the Washington Center.

Lord Franzannian's Royal Olympian Spectacular Vaudeville Show is the brainchild of storyteller, actor and producer Elizabeth Lord. She came up with the idea years ago as a way to earning money to support local performing artists, and the host/master of ceremonies/ringmaster, Lord Franzannian, is none other than Lord in a fat suit wearing a big mustache and a bright red circus ringmaster suit.

From the press release: “Working in the tradition of vaudeville shows from the early part of the 20th century, this fast-paced variety show promises a little something for everyone. Dance, music, comedy, storytelling, burlesque, juggling, even feats of amazement! …Proceeds benefit working performers, and BigShowCity, a non-profit Performing Arts Organization whose mission is to help burgeoning artists realize their ambitions by providing financial and emotional support.”

Hardly anyone alive today remembers what vaudeville was like in its heyday, but some of us at least remember the Ed Sullivan and Steve Allen shows on television, and we remember George Burns and Gracie Allen and Jimmy Durante, and those are Lord Franzannian’s predecessors.

Many of the acts are bawdy, some are lovely and nostalgic, and some are downright insane.

Vaude deVille, one of the founders of and a performer with Wrinkles of Washington, does song and dance numbers in the old vaudeville style. You can almost imagine him performing two shows a day at The Palace. He kicks off both the opening act and the second act with his smoothly expressive singing and soft-shoe dance.

The singing duo Birds of a Feather entertain with sweet romantic songs.

Lester Crafty the Bearded Lady is… well, you just have to see her act.

O’Neill’s reading of a letter of complaint is hilarious and graphic and filled with over-the-top references to vomiting and defecating, but read in a very underplayed and sweet manner. If I hadn’t seen O’Neill act and sing in other shows I might have been tempted to think there was no acting involved at all in her performance -- that it was just a straight reading. Oh, but it was a performance all right, with pitch-perfect inflections to clue us in that there is something deliciously wicked underneath her Little Bo Peep demeanor. The letter was so original that I had to ask: was it an actual letter with only the name of the food company fictionalized or was it written for this performance? She said it was an actual letter written by a friend to “Hmmmm Foods.”

Nani Poonani’s burlesque was funny, acrobatic and sexy. She has – in addition of a fabulous stage name – a beautiful body filled with tattoos, none of which (that I know of) are hidden from the audience. A second burlesque number featuring Frida Fondle as Peter Fondle is an inventive and comical routine that begins with a woman in drag as a fat man and ends with the traditional burlesque tassel twirling. Both performers are members of Tush! Burlesque in Olympia.

One of the most astounding acts was Soren’s buugeng performance to the accordion accompaniment of Rheanna Murray. I had never before heard of buugeng and had to look it up.  It’s a curved wooden instrument associated with martial arts that is handled somewhat like nunchucks. The performance was hypnotic, combining elements of dance and juggling (without tossing things in the air).

There were a couple of less than stellar performances. Brent Blakley’s stand-up comedy act had some funny moments but fell flat overall, partly due to a self-effacing, deadpan delivery that didn’t quite make it; and although the Gotta Swing dance troupe was lively not all of the individual dancers were quite up to snuff.

Most but not all of the musical numbers were backed up by the four piece band, The Vaude Zannian Playerz, made up of Scuff Acuff (band leader) on guitar/washboard and kazoo, Alison Metheny on bucket bass, Ethan Rogol on mandolin, and multi-talented  Rheanna Murray on accordion (of whom I wrote in my review of Olympia Family Theater’s February 2011 production of “Alice’s Adventures in Wonderland,” in which "she plays Alice with dignity and grace...")

Acuff and Metheny also performed in duet on a song about a “tight, wet, pussy cat” which was fall-on-the-floor funny.

Lord tells a different in every performance, inviting the audience to supply major story elements including who the story is about and then totally improvising the story with accompanying fast-draw illustrations by The Great Sylvester. So she’s told stories about a milkman, a red rubber boot that leaves the closet and goes on adventures, a London prostitute abducted by aliens, and a badger who travels to Australia and goes to the opera. In a stroke of genius Friday night Sylvester gave Harvey the milkman a shirt that said “Harvey Milk.”

With its near nudity and a plethora of sexual content and double entendre, this show is without a doubt intended for mature audiences only, but there will be a special performance added for an all-ages audience October 2 at 4 p.m.

Tickets available at door night of show, or to reserve a seat buy a ticket online at www.brownpapertickets.com/event/126005
Where: The Midnight Sun Performance Space, 113 N. Columbia Street in downtown Olympia.
Posted by Alec Clayton at 10:32 AM