Imagine I’m a writer - Part 1 Until the Dawn 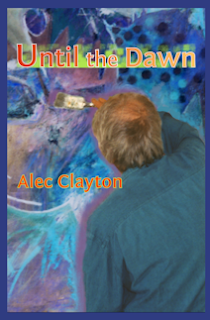 Imagine I’m a writer and you’re a reader, and you have questions about my books.

Actually I do that quite often. I imagine I’m at a reading or a book signing and I wonder what kinds of questions people might ask. It helps me be prepared when I really do have a reading, although nobody ever asks the questions I imagine they’ll ask.

OK, so what about my very first book, Until the Dawn? I imagine you might want to know how I came up with the idea, how long it took me to write it, if Travis and Marybelle were based on real people, and if the guys really painted Chuck’s dick red on his wedding night.

I started working on it in about 1984 or ’85. The first amorphous idea was to write a story about a good man who did something bad. I was vaguely thinking about forgiveness, thinking maybe I could illustrate through fiction why people should not judge other people too quickly. So I needed to imagine some bad thing this good man did. Murder? Rape? Bearing false witness? It took me months of trying out different ideas before I figured out what it could be and how it could have happened.

I began to imagine who the main character could be, and as I brought him into focus I kept in mind that all too often the hero of a first novel is the author himself, thinly disguised; i.e., disgustingly obvious. I wanted to make sure my protagonist was nothing like me. I didn’t want readers asking, “Did you really do that?” So I made my main character a big bruiser of a guy (I’m a tiny little man) and to make him unique I decided to make him talk like Neal Cassady, the model for Dean Moriarty in Kerouac’s On the Road. I named him Travis after a brother-in-law, but he was nothing like that Travis. I wanted to give him a noticeable physical characteristic too, and I thought of a friend whose index finger had been cut off at the first knuckle. Once I described him as having a missing finger I thought, “Oh shit! Now there has to be a reason why his finger is missing,” and the mystery of how he lost that finger became a central part of the plot.

These were the days before personal computers. I wrote it on an IBM Selectric typewriter. Cut-and-paste was not an option. If I wanted to change something I had to rewrite whole sections from the beginning, which I did over and over. I moved the opening scene to the back of the book, I eliminated some characters and reinvented others, I changed the narrative voice half a dozen times. I tried writing in the third person with an omniscient narrator. I tried letting Travis be the story teller. I tried having multiple narrators. And finally I decided to let a minor character tell the tale.

It took me a couple of years and many re-writes before I thought I had it ready to send to an agent. Luckily, my wife had connections with a great agent, an old family friend who was willing to take a look at it. But she said it wasn’t saleable. She said she didn’t like the main character, so I did some more re-writing to make him more likable. She also said a couple of things that, frankly, pissed me off. First, she said there were no such things as cypress knees. Travis fished among the cypress knees, something I had done many times on Lake St. John in Louisiana. And she criticized me for using the expression “back in the back,” an expression I’ve heard all my life. It’s common in the South at least, and that’s where the book was set. So there, Miss Know-it-All literary agent.

Anyway, she was not willing to take it on. I tried sending query letters to a few other agents and publishers, but nobody was interested, and I gave up and put the book away for a long time, finally digging it out again in 1989 or ’90 after we had moved to Olympia and bought our first computer. I re-wrote it once more and found an agent in San Francisco who said she was willing to represent me but strongly suggested one more major re-write. Instead of telling the story chronologically – it covered three generations of Travis’s family, beginning with his grandfather in the1920s and ending in the 1980s -- she wanted me to jump back and forth between New York in the present and Travis’s home town of Tupelo, Mississippi in the early years.

It was the best suggestion anyone ever made. Making that change made the novel come alive. But the agent then dropped me, and I couldn’t find another, so I ended up self-publishing.

So, what’s the book about?

Travis Earl Warner was an artist. He was famous in the 1980s. He lived a wild life. Hard drinking and drugs and sex and frantic work alone in his SoHo loft.

From the opening of Until the Dawn, an excerpt from Travis’s journal:

When you put that last stroke on your canvas and you know you've done it right, and you step back to look at what you've done, a deep sigh comes all the way up from your loins and you say “Yes! Yes, by God, I did it.”

But it can also be like a cramp in the pit of your stomach that wrenches your intestines and won't let go; because to make a painting you have to reach deep down inside and pull it out, and when it doesn't come it's like the dry heaves. And the loneliness of it! The loneliness is unbearable. You're all alone in a huge loft and you're slinging paint with concentration so intense it's exhausting, and when you finally set your paint bucket down and step back to see what you've done there is not a soul to share that moment with, be it ecstasy or be it loathing; because you've experienced a rape or a battle or the most tender of caresses, and it was all between you and that goddamn canvas; and suddenly you get this memory flash from back when you were in art school and your professors ripped your work apart, and you look at your painting and you can't even see it. You haven't the slightest idea whether it's art or crap. So you grab the freight elevator down to the street and you walk to the corner bar and get gloriously drunk.
There was a wild party in Travis’s loft that ended with him lying on the floor in a pool of blood. Everyone panicked and fled, all but one mysterious woman who stayed behind to nurse him. Travis was never again seen in New York. Neither was the woman. As far as the art world knew, he just vanished after that party. An old friend, Johnny Lewis, goes in search of Travis, and as he travels to their old home town in Mississippi he tells the story of Travis and his family—his mother, Marybelle, who escaped from her abusive husband while she was still pregnant with Travis; the banker and his wife who took her in and helped her raise her son; and Travis’s sister, Cassie, who dreamed of being a dancer. Through Johnny’s eyes we relive Travis’s life through his teenage years in the ‘60s and his rebellion against his home town and everything it stood for, through his years as a famous artist, and finally up to that party in his SoHo loft.

When Johnny finally finds Travis and the woman who vanished with him,  he discovers what happened at that party and revealed, along with the identity of the mystery woman.

To answer those hypothetical questions I posed at the beginning of this essay:

Travis and Marybelle were not based on real people. Travis was totally imaginary.  In the creation of Marybelle I borrowed character traits and looks from two or three women. Some of the scenes involving her abusive husband were based on events from when my wife and I ran a shelter for battered women. The only other characters who were based on real people were Travis’s aunt Janet, based on my sister, and Marybelle’s second husband, who was based on an uncle I never knew but had heard stories about.

And what about the dick painting? Ah yes, a brother-in-law told me that his friends planned on doing that to him, but it never happened. I had a lot of fun describing how they got the paint off.

More information, including reviews and excerpts can be found at http://www.claytonworkspublishing.com/
Posted by Alec Clayton at 9:32 AM