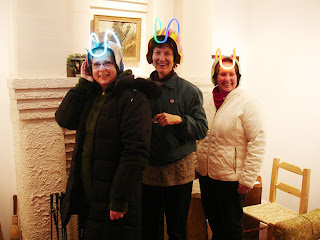 Supporters struggle to keep it alive


Been to Artwalk lately? If your answer is no, I have two things to say about that:

First, you're not alone. And second, you're missing something good.

Voicing what I suspect many art dealers have thought but haven't necessarily expressed, Tammy Radford of American Art Company on Broadway says attendance is "extremely low" at her gallery during Artwalk. Radford responded specifically to the question, "Have you seen changes in Artwalk since you've been here?"

"The economy has had a negative effect on all retail businesses," Radford says.

The obvious detriment to a successful Artwalk in Tacoma is that many of the venues are too far apart. The first time I participated in the event there were many galleries within two blocks of each other on Broadway, plus Commencement Art Gallery right around the corner and the old Tacoma Art Museum nearby on Pacific. Now TAM is farther down Pacific and Flow is way down by the Tacoma Dome. Fulcrum is far up on Hilltop on MLK, and B2 and Mavi are too far away to walk in the other direction on St Helens and Fawcett, respectively.  Who can walk Artwalk or afford the gas to tool venue to venue?

On the other hand, Artwalk is a boon to folks like Peter MacDonald, owner of Brick House Gallery, whose space is open only for Artwalk and by appointment.

"Without (Artwalk) I probably wouldn't even have a gallery," MacDonald says. "It provides me with a specific time to get a group of people through the door."

MacDonald also says the Artwalk "Art Bus," created by Angela Jossy, helps to bring folks through his door. MacDonald says the Artbus "ferries a group around to several galleries - if the galleries pony up some dough. This brings around a crowd, which is good for exposure, but to be honest, I have never made a sale from anyone on the bus."

Other gallery owners have said the Art Bus is a big help.

Phyliss Harrison from The Art Stop was one of the founders of Artwalk and is still active in promoting the event. She recently posted a message to downtown galleries and other interested parties on the city's Tacoma Arts Listserv saying plans are underway to revise the Artwalk map and website while encouraging others to get involved. Harrison's PR message was, "The more members we have, the more resources we can pool to promote Tacoma as a wonderful destination for art lovers and art buyers!"

"While the Third Thursday Artwalk is a good thing to do, our greatest benefit is in the ability to pool resources for much broader marketing efforts and to underscore to potential visitors from outside Tacoma just how vibrant and varied our arts community is. Hence, it's not just about Third Thursday," Harrison says.

MacDonald spoke about the problem of venues being too spread out. While saying the Art Bus helps, he said it would help more if the bus could make "a few rounds so people could get off the bus if they wanted to stay in one place for more than 10 or 20 minutes."  He also says that TAM and the Museum of Glass draw people out but "may suck some business away from the galleries."

Some galleries have complained that Artwalk is less than successful; others don't take part at all. Interestingly, Andrea L. Erickson of Flow (formerly Mineral), which is far off the beaten path, says Artwalk has worked well for her gallery and has been the "main focal date of our shows." Artwalk at Flow she says has been well attended.

For some the cost of Artwalk outweighs the potential benefits. Gary Boone at B2 Gallery says he fully supports Artwalk and is always open on the third Thursday of the month, but he doesn't pay the fee for being included on the map and website because the cost is greater than what he believes it can bring in.

Harrison says, "Dues are $360/year and include website and map listing, map distribution throughout Pierce County, and one or two other print ads during the course of the year. This year it will be as much holiday advertising as we can spring for."