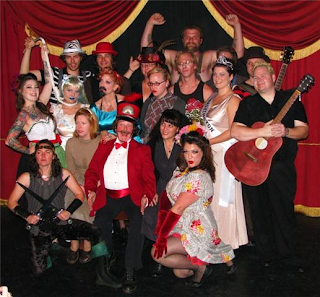 Pictured: the cast from last year's show.
Photo courtesy Elizabeth Lord (seen in red hat and coat)
Yesterday I posted a review of the 5th annual "Lord Franzannian's Royal Olympian Spectacular Vaudeville Show!" Today I'd like to share a little information about the show's producer and master or ceremonies, Elizabeth Lord.

When Lord was a senior year in high school in Las Vegas she made up her mind that she wanted to be a professional storyteller. She had studied acting in high school and dreamed of becoming a famous actress but realized she could never "make it in the hardcore acting world of TV and film" because she was "not skinny and 'cute' enough."

But where could a young woman just out of high school study to be a professional storyteller? Where else but The Evergreen State College? So at TESC Lord studied folklore, world mythology, world religion, folktales, orality vs.literacy, and theater arts.

After graduation in 1995 she began "gigging" - getting paid to tell stories, and she's been doing it ever since. telling her stories for such organizations and groups as City of Olympia, Pierce County Library, Olympia School District, TESC, and many Washington State Agencies. She's built an impressive following for her original one-woman storytelling shows, including "Vegas Childhood," "Cheap Rent," "Smoking is Cool" and others.

She has also acted in, narrated or directed many plays for Theater Artists Olympia and Prodigal Sun, including "Stop Kiss," "Parallel Lives," "Reefer Madness," "Don Juan in Chicago," “Picasso at the Lapin Agile” and "Cannibal!! The Musical." And she manages The Midnight Sun Performance Space. She is nothing if not versatile.

In 2001 Lord and others created BigShowCity, an organization dedicated to raising money to support performance artists, and they put on what they hoped would be an Olympia annual festival. They created a three-day, multi-venue festival. It lasted only three years. The first year 20-plus people helped organize and fundraise; the second year it was only Lord and Erik Fabian; the third year it was just Lord with help from an Evergreen intern.

The festivals could not be continued, but Lord didn't give up. She decided to do a one-night, one-venue variety show. Vaudeville, the original variety show format, seemed like the way to go, so in 2007 she gathered some artists together and created the first show. The main collaborators were Lord and Mark Franzen, a former member of The Audition is Dead theater troupe. "We decided to go with the old school Vaudeville show poster format which always put the producers name first on the bill," Lord said, "And so we created a fictional producer name, which is a combination of our names, Lord and Franzen, and the fictional character Lord Franzannian (played by Lord) became a character in the show.

The rest, as they say, is history. The 5th annual "Lord Franzannian's Royal Olympian Spectacular Vaudeville Show!" continues through this weekend at The Midnight Sun Performance Space. It's a lively, bawdy, and entertaining show that includes song, dance, comedy, burlesque and more.


Recomended for folks over the age of 16.

NEW! October 2 is the special Youth Audience Show! Starts at 4 pm (now folks 15 and under can come see some Vaudeville!)

Available at the door night of show or go to www.brownpapertickets.com/event/126005 to reserve a seat.

Wow, the article is amazing as it had very clearly cited to become a worthy storyteller, which reminds me of a website of the South Sounds called papakali.com which generously offers the oppurtunity of story tellings to the readers as it allows the readers themselves can add their own version of stories to the already existing tales of the South Sound.