There's nothing subtle about ‘Cats' 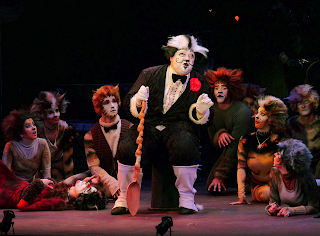 Chris Serface as Bustopher Jones and the cast of "Cats"
Photo by Kat Dollarhide
The News Tribune, July 15, 2011
Andrew Lloyd Webber’s “Cats” is one of the most popular musicals of all time.

It won six Tony awards and had the second longest run on Broadway. It is also the most joked about musical ever, the epitome of everything outlandish and presumptuous about Broadway musicals, and has been called the most overrated musical of all time – even by the person who is now producing and directing it for Tacoma Musical Playhouse.

The music, dancing, costumes and set are all big in every sense of the word, combining for the kind of spectacle that TMP thrives on. But the story, while filled with high drama and quirky playfulness, is almost impossible to follow, a problem that is made worse because many of the lyrics are hard to hear. Among the huge cast, only Micheal O’Hara, Chris Serface, Karen Christensen and one or two others can be clearly heard. The rest are often either drowned out by the orchestra and chorus or they garble their words.

The music by Webber and David Cullen is wonderful and wide-ranging in style with hints of every musical genre from jazz to opera, played flawlessly by Jeff Stvrtecky and his orchestra.

The costumes designed by Janet English are wild, with multi-colored, skin-tight tights, long tails, big hair and even bigger coats.

The lavish set by Will Abrahamse is one of the biggest and best ever seen at the Narrows Theatre. The set is a junkyard at night with a huge moon and bright stars in the background. Everything from junk cars to tires and an old-fashioned child’s drum are hung to give the impression of how they would look to the cats. Never mind that the scale is totally out of whack – with, for instance, a car tire almost as big as the car next to it and a drum of the type used in the Revolutionary War that is even bigger than that monster tire – the overall effect is stunningly beautiful. It is like the barricade set in “Les Misérables” if done with whimsy.

Also outstanding are the lighting by John Chenault and the choreography by director Jon Douglas Rake with assistance from Lexi Scamehorn.

“Cats” is a poetic and musical re-interpretation of T.S. Eliot’s “Old Possum’s Book of Practical Cats.” It’s not so much a play as it is a musical revue with lots of dancing and a bit of magic. There is even one number near the end of the first act, “Song of the Jellicles and the Jellicle Ball,” which begins with a singer then turns into a long instrumental song with elaborately choreographed but abstract movement.

The cast is huge with 28 named cast members, many of whom have solos. None of the characters can quite be said to have lead or starring roles, but there are a few who stand out. Among these are Christensen, O’Hara, John Kelleher and Steve Barnett.

Christensen plays Grizabella, the old gray cat who left the junkyard they call home only to later return and find herself ostracized by the others. Her solos on “Grizabella: The Glamour Cat” and later on “Memory” with Mauro Bozzo as Munkustrap and Kim Lavoie as Demeter are among the saddest and strongest musical numbers in the show. Interestingly, Grizabella is the only character in the play that doesn’t look like a cat. Despite her tail, she is costumed not as a cat but as a bag lady with a ratty fur coat.

The only other time when the cats step out of their catness is when O’Hara as Gus, The Theatre Cat, and company perform as cat actors playing human roles. O’Hara is breathtaking in this show-stopping, two-part production number. With yowling and screeching and lovely singing, O’Hara shows that he’s a consummate actor as well as a great singer. Beginning as a palsied former actor way past his prime, he transforms himself back to his former glory in a highly stylized swashbuckling scene with pirates and Chinamen.

John Kelleher as Old Deuteronomy sings beautifully on the climactic number “The Ad-dressing of Cats,” and Barnett as the sexy tomcat Rum Tum Tugger has campy moves that are a joy to watch.

Many performances are already sold out, so call for tickets early. If you go to the theater without advance tickets, you may not get in.