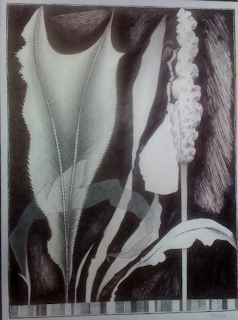 The good thing about old folks is they've been at it long enough to get good. Olympia painters Dale Witherow, Bob Gillis, Ron Hinson and Georgia Munger prove it with this show.

Witherow is a pure abstract expressionist. Young people might think that AE died way back in the '60s, which by now is also ancient history, but I'm one old guy who thinks the Abstract Expressionists were the best painters America ever produced and the movement will never die. Witherow paints light and movement - not angst, which AE is known for, but unbridled joy, with heavily layered and exuberantly brushed impasto and sparkling glazes. I've seen a lot of Witherow's paintings over the years, but there are some in this show unlike any I've seen before, including a painting of a single flower in a long-stemmed vase (imagine a flower as painted by Cy Twombly if you can) and a repetitive pattern of squares with letters reminiscent of some early Jasper Johns paintings.

The best of his work in this show is one called "Faded Glories," which has random blotches or circular marks both painted and scratched into the surface  of a pattern of overlapping white-on-white glazes (actually pink and gray, but it feels like layered sheets of snow and ice) and the mark making is like that of the above-mentioned Twombly, one of the last of the greats who died just last week.

Hinson is represented by a series of highly inventive and humorous illustrations from "Alice in Wonderland" and two powerful charcoal drawings from his series of mythology drawings, "Birth of Adonis" and "Prometheus Bound." These have been shown in other exhibitions, and I've reviewed them before. They are outstanding in both conception and execution.

Gillis is showing a suite of eight pencil and ink drawings titled "One," "Two," "Three"... and so forth up to "Eight."  These are totally unlike anything I've ever seen from him, more like graphic illustrations than the abstract paintings he's known for. They are highly stylized, high-contrast, black and white pictures of fronds, trees, flowers, and one of a flock of birds.

Munger is known around Olympia for her paintings of crows, but there's nary a crow in anyone of her little pastel drawings in this show. There are, however, one of two other birds and a horse, and a lot of abstract paintings with bright colors - some of which are based on landscape and remind me of Wolf Kahn and others which are arrangements of organic and geometric forms on a flat surface. My favorites are the landscapes, although there's something really enjoyable about that silly looking horse.

Art House Designs has expanded and renovated its gallery space in the past year providing a nice venue for some good art from three old guys and one old lady. See them at the corner of Fifth and Franklin in downtown Olympia through July 21.

The large square abstract of Dale Witherow's in the window of Art House caught my eye and I HAD to go in. So glad I did. Witherow's work, especially, appealed to me, and I agree with Clayton that "Faded Glories" is spectacular. This gallery is a great space for viewing art. Enjoyable.