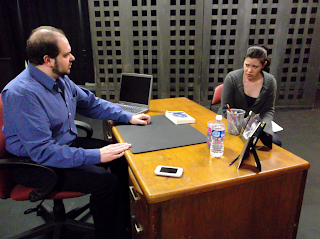 In his book of theater criticism ““How Good is David Mamet Anyway?” John Heilpern writes:

“…the occasional hand to hand combat that broke out among warring factions in the audience following his drama of sexual harassment, ‘Oleanna,’ provocation seems to be the name of the game. …Mr. Mamet infuriates us knowingly. His psychological power plays, the repressed undercurrents of anxiety and simmering violence, the oblique, disjointed Mametspeak that has become his signature style, are meant to dislocate and disturb us.”

Yes, there have been reports of hand to hand combat among patrons following early performances of Mamet’s “Oleanna.” And yes, “Mametspeak” is an accepted term common among people who discuss theater.

“Oleanna” is a deliberately provocative play. It was written purportedly as a sympathetic look into sexual harassment in academia, but Mamet, who has been called chauvinistic, has been accused of turning the victim into the victimizer and patrons have waged war over the two characters.

A female college student, Carol (played by Deya Ozburn in Theater Artists Olympia’s production at Olympia Little Theatre) accuses her professor, John (Christian Carvajal) of sexual harassment. Since the play first opened in 1992 audiences have argued about which of these characters is right. Carol accuses her professor of harassment and attempted rape, an accusation that will surely destroy his career. Is he guilty or innocent? Is she a victim or has she falsely accused him, and if so for what purpose?

Director John Munn said that most productions have weighed more heavily in favor of the professor as the one who is being wronged, and Carol as a manipulative woman who is making false accusations, but Munn presents it in a more evenhanded way through directorial choices without changing Mamet’s words, letting the audience decide whose side they are on. He even asks audience members to vote their choice in the lobby after seeing the play.

Before writing more about this particular production, a few words about Mametspeak are called for. Obviously the term refers to a manner of speaking (or more literally writing dialog) that is so strongly associated with Mamet that it has taken on his name. In normal conversation, and most especially when confused or upset, people seldom speak in clear and logical sentences. They stammer, they repeat themselves, they cut sentences off midway and they interrupt one another. It’s not pretty, but it’s real.

It can be very frustrating to sit through two hours (with two 10-minute intermissions) of two characters arguing, misunderstanding each other, shouting at each other and being constantly interrupted not only by each other but by a constant stream of infuriating phone calls (Munn updated this version to use cell phones, thereby allowing his actors to be more mobile). It may be frustrating, but it is highly charged dramatic entertainment. And I use the word “entertainment” in its broadest sense.

Mametspeak must be hard to memorize, and with only two actors to share the burden learning their lines must have been an almost impossible task. But the nature of their speech patterns with all their backtracking and repetition and broken sentences makes it such that if either of them dropped lines it would be hard to tell, and Carvajal and Ozburn are good enough that they could easily cover for each other. I noticed only one tiny moment when Carvajal seemed to have stumbled on a line and quickly recovered. But who knows? Mamet may have written it that way.

Both actors do a great job. I expected them to because they’ve each proven their acting abilities in other performances, Ozburn most recently in “The Last Schwartz” at Harlequin and Carvajal in “Frost-Nixon” at Tacoma Little Theatre. I must say that they did not let me down - they exceeded my expectations in thoroughly inhabiting these difficult roles. Anyone who has been to college has known people just like Carol and the professor, and Carvajal and Ozburn play them so naturally and with such spot-on gestures, voices and body language that we feel we know these people. We can picture John at home with his wife and Carol at ease when she is with her fellow students, and feel the tension and confusion and anger as they confront one another in the electrified atmosphere of his office.

I’ve seen “Oleanna” only one other time, at Evergreen Playhouse in Centralia with Sara Henry as Carol and John Pratt as the professor. In that performance the characters went through noticeable changes in posture and demeanor with costume changes to enhance these changes. At the beginning Carol was hesitant and shy, and the professor was arrogant and full of himself; and as the play progressed she became more self-assured and he fell apart. In this version similar changes take place, but they are much more subtle and more natural.

This is some of the best acting I’ve seen this year.

This is an intelligent play that explores complex issues and opens up a multitude of possible interpretations. The language is harsh but without the over use of curse words which Mamet is known for - as in “Glengarry Glen Ross” as a prime example. There is also some violence that might be shocking to some viewers. It is not a play for children nor is it a play for squeamish adults.

When:  8 p.m. Thursday-Saturday and 2 p.m. Sunday, through July 24
WHERE: Olympia Little Theatre, 1925 Miller Ave., NE, Olympia
Tickets: $12 at the door or at http://www.brownpapertickets.com

See Molly Gilmore's article in The Olympian.
Posted by Alec Clayton at 9:39 AM