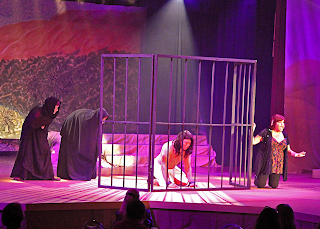 Justin Thornton as Joseph and Cherity Harchis as the narrator (right). Photo by Bob Baltzell
“Joseph and the Amazing Technicolor Dreamcoat” at ASTRA
Over the past four summers I have been privileged to enjoy the annual dinner theater shows from All Saints Theatrical Repertoire Association in Puyallup. For an all-volunteer, small town theater company that does shows in a school gymnasium, they are quite amazing. It’s obvious that they’ve been able to raise a lot of money for their productions over the years, and with hundreds of volunteers (they said over 300 this year) and almost a year to prepare each show, it shouldn’t be a surprise that they go all out.

I remember my initial reaction the first time I went to one of their shows was that they were almost in league with big city theaters like Seattle’s 5th Avenue and Paramount – with a catered dinner to boot.

Having said all of that, I was disappointed that this summer’s production of “Joseph and the Amazing Technicolor Dreamcoat” was not up to the standard of excellence I’ve come to expect. There were some fun costumes, and the children’s chorus was fun to watch – lots of exuberance and talent – and the lead actors, Justin Thornton as Joseph and Cherity Harchis as the narrator, were marvelous. Beyond that, unfortunately, this show fell flat.

The popular play by the successful team of Andrew Lloyd Webber and Tim Rice has an interesting history. When first performed in a school in England in 1968, it was only15-minutes long. It was Webber and Rice’s first musical, but not the first to make it to Broadway. There were many, many earlier incarnations of "Dreamcoat," both in England and America. When the music was first released it was billed as a sequel to “Jesus Christ Superstar” (also by Webber and Rice) even though “Dreamcoat” was written first and had very little in common with “Superstar” other than they were both based in Bible stories.

It was a huge hit, and is now a favorite show for many community theaters, schools and churches. Its popularity can be attributed to the wholesome, family-friendly and uplifting story, to its quirky humor, and to its wide variety of musical genres, from calypso to cowboy songs.

Some things such as a parody of Elvis Presley in ancient Egypt can be a delightful surprise the first time you see them, but after the initial surprise wears off it takes some top-notch acting and singing to bring it off, and that doesn’t always happen in this production.

The set designed by Nancy Morris is weak in comparison with the marvelous sets she designed for “Fiddler on the Roof” and “Oliver,” but there are some nice touches to the backdrop paintings, and the lighting by Greg Scott works well.

The orchestra conducted by Mike Lewis is excellent.

The costumes by Diana Scott and Sue Van Slyke run the gamut from outstanding to just silly. Joseph’s coat is wonderfully colorful and fans out like peacock feathers. Among the just silly costumes are the camel (the typical two actors inside with too much of the actors showing) and a little kid as a sheep. Both of them look like something you’d expect to see in a middle school production. Perhaps that was intended as camp, but it didn't work that way.

Harchis is a good narrator. In this version, the narrator is a modern day story teller, perhaps a librarian or school teacher (the script allows for various interpretations of the narrator’s role), and she seems to truly love working with the kids and is very convincing as a mother figure; and she has a strong voice, singing clearly and passionately on tunes such as “Any Dream Will Do.”

Thornton in the lead role as Joseph is amazing. This is a young man who should have a shot at a successful career in musical theater if he wants to pursue it. He has a beautiful, well controlled voice, and he acts with confidence, throwing himself into the role.

The old fashioned cowboy hoedown number "One More Angel in Heaven" is fun but should be more exuberant. The calypso parody of Carmen Miranda, “Benjamin Calypso,” is nicely done. The humor in it rests on the Miranda-type headgear and the oddness of a Calypso number in a Biblical story.

Thornton’s plaintive solo on the soulful "Close Every Door" is a real showstopper. But the songs that are meant to be comic highlights, the seduction scene with Potiphar’s wife and Pharaoh’s Elvis imitations, are not well done at all. The seduction scene is not seductive, and PJ Sirl as Pharaoh does not have the voice or the moves to pull off a good Elvis parody.

Overall, it’s a colorful, big stage spectacle, and Thornton’s performance alone is worth the price of admission.