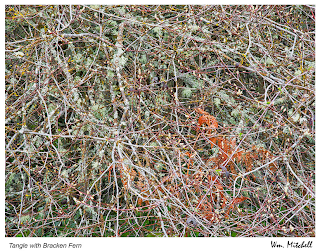 Among the art exhibits that I wish I could review but can't is the current photography show at Tacoma Community College featuring work by Melanie Johnson, Alice Di Certo, Kyle Dillehay and William Mitchell. You might remember these names from shows at the old Art on Center Gallery (and, if memory serves correctly its successor, AOC Gallery, and that very nice co-op gallery that took its place in the space next door to the Grand after CJ Swanson and David Goldberg migrated to Seattle and before the Grand took over -- one gallery in three incarnations that is greatly missed). Anyway, I remember reviewing these artists before, and I recall that they were quite good.

Although I am unable to review this show, Rosemary Ponnekanti did review it for The News Tribune. You can read her review here.

William Mitchell sent me a digital image of one of his photos. It is called "Tangle With Bracken Fern." It is a close-up of twigs and leaves, and it looks like a Jackson Pollock painting. So much so, in fact, that it seems too obvious to mention. I've seen a lot of attempts at painting Pollock knockoffs, and as easy as it looks like it should be, they never even come close to having the density spatial layering and lyricism and sparkle of a Pollock. Yet this photograph does.

Where: The Gallery at Tacoma Community College, 6501 S. 19th St. (use entrance on South 12th and Mildred streets), Tacoma
Posted by Alec Clayton at 3:14 PM