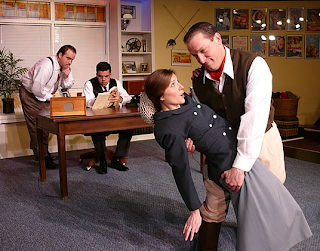 I found it difficult to settle into “Moonlight and Magnolias” at Olympia Little Theater opening night. The introductory prelude – cleverly written by Corey Moore to emulate a 1939 newsreel – went on too long, the dialogue in the opening scene was stilted and I had a hard time accepting 17-year-old Alberto Cintron as 37-year-old movie mogul David O. Selznick.

But as the actors got past their opening-night jitters and took on their respective roles, I got caught up in the witty dialogue and the cynical take on a major moment in film history – five days of sheer lunacy in which Selznick locked himself in his office with screenwriter Ben Hecht (Corey Moore) and director Victor Fleming (Terence Artz) where he insisted they subsist on nothing but bananas and peanuts (Selznick’s idea of brain food) until they came up with a workable script to Margaret Mitchell’s best-selling novel “Gone with the Wind.”

The script by Ron Hutchinson takes great liberties with the actual events, but it paints accurate portraits of the characters in this zany comedy-drama. Selznick had already spent two years of pre-production filming, had fired a host of directors (the latest being George Cukor) and had not yet cast his leading lady. He hired Fleming, who had just finished directing “The Wizard of Oz” and Hecht, who at the time was considered the best screenwriter in Hollywood.

Both Selznick and Hecht were Jewish, a major factor in the play. Most of the early Hollywood moguls were Jews, and many of them were complicit in America’s rampant anti-Semitism – looking the other way in order to get along and become rich and powerful. Selznick cared nothing for the plight of his fellow Jews. Hecht, on the other hand, was a radical who cared very deeply and detested the racism that was glorified in “Gone with the Wind.”

Both Hecht and Fleming thought “Gone with the Wind” was a terrible book and that the movie would be a huge flop.

Hecht had never actually read the book – a major part of the plot, so Selznick and Fleming act out all the major scenes for his benefit.

Hecht and Selznick fight bitterly over almost every scene, their battles coming to a head when Hecht refuses to write a scene in which Scarlet O’Hara slaps her slave handmaiden, and throughout all of this the three men get closer and closer to insanity due to lack of sleep, unrelenting pressure and the absurd diet of peanuts and bananas.

Other than Selznick, Hecht and Fleming, the only other character on stage is Selznick’s secretary Miss Poppengull (Hannah Eklund). Eklund has very few lines. Mostly she just replies “Yes, Mister Selznick” to his every order. But she paints a perfect picture of the put-upon secretary with subtle facial expressions and a demeanor that grows increasingly slovenly. She lets her hair down, and she loses a shoe in the peanut-shell and banana-peel bedlam of the office – terrific acting in her very small role.

Cintron’s role is the most demanding because he has to be convincing as an autocratic and proud filmmaker and comically slip into various other roles as Selznick, a bad actor, tries to act out Rhett Butler and Scarlet O’Hara roles. He does a credible job, even though he can’t disguise his youth.

Artz and Moore are both consummate actors. Moore’s anger and disdain are palpable, and Artz’s physical comedy brings the house down.

The set designed by Kathryn Beall and Toni Holm captures the look of a 1939 producer’s office and, luckily, the only set change necessary is the gradual disarray of the office, which is accomplished primarily by stagehands scattering paper, peanut shells and banana peels. (I must say this is the only time I’ve ever seen stagehands garner applause by throwing basketfuls of paper on the floor.)

“Moonlight and Magnolias” is a wild comedy of the slapstick variety with an underlying theme of political and social consequence that remains relevant 69 years after the story takes place.