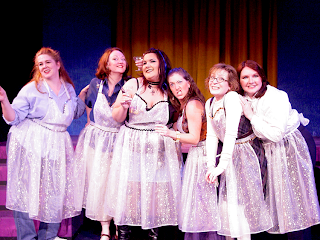 Imagine a “Saturday Night Live” episode with a feminist theme and a lot of rockin’ music, and you’ll begin to gain a glimpse of what is in store for you when you see “6 Women With Brain Death or Expiring Minds Want to Know” at Capital Playhouse in Olympia.

“6 Women” is a laugh-out-loud romp through the lives of contemporary women in which nothing is sacred – neither God nor children, sex or TV soap operas, not even press-on nails.

It is a six-woman play presented in episodes. It opens with strangely distorted music from a three-man band and the six women chanting headlines from tabloid newspapers: “Bizarre Disease Makes Woman Eat Kitchen Sink!” “Mom Sells Twins to Buy Lottery Tickets” and “Cannibal Cow Eats Hamburger.” Their singing and chanting voices overlap and then come together in chorus, and then the individual women speak directly to the audience in a kind of singsong overture that hints at what is to come.

Quick costume changes – some done in full view of the audience and some consisting of nothing more than apron-like dress fronts slipped over their clothes – and the most basic of sets allow for a smooth flow from skit to skit, more often than not with one or more of the six women staying on stage during scene changes to become the lead character in the next skit. And what wildly inventive skits they are.

The opening one, “All My Hospitals,” examines the life of a woman addicted to soap operas. Wanda (played by Kim Holm with a mountain-size mop of hair in rollers) talks to her television while watching her favorite soap. She goes ballistic when the show is interrupted for a special announcement. Then the leading character on the show, Veronica (Heidi Fredericks) talks back to her and then steps out of the television to tell her she’s sick and tired of her whining. Veronica torments Wanda by telling her she knows the big secret of the show and she’s not going to let her know.

From Wanda’s kitchen, we go to a stage in Detroit where singers are auditioning for Motown. A woman in a choir robe (Karen E. Christensen) timidly announces – with a special invocation to Michael Jackson, whom she calls “Bro” – that she and her backup singers, the Divas of Motown, have blended classical music with soul, which they demonstrate with operatic singing backed by choreographed dance steps.

The next skit, “Rambi,” is a mixture of dancing animals from the Walt Disney film “Bambi” and “Rambo,” which seems especially appropriate due to the new Sylvester Stallone film.

“High School Reunion” looks at a group of friends eager to attend their 20th reunion. Starry-eyed and perhaps blinded by their desires, the women are convinced they have all “arrived,” despite divorces, abortions and Valium addictions.

They all remember the girl they campaigned for to become prom queen, who was not elected because she was too fat. Melissa Backstrom is marvelous as the not-quite prom queen. She is at the reunion wearing punk clothes and makeup, including black lipstick, a ripped stocking and a dangerously low-cut blouse, and she belts out the prom queen song with a powerful and soulful voice.

Other skits include “Game Show,” which includes the sadistic game “Wise Up or Die”; “Severed Head”; “Divas at Nashville,” a twist on the Motown skit with the same chorus now auditioning for the Grand Ole Opry; “Barbie and Ken,” a painful look at messed-up love lives; “God is an Alien,” in which Backstrom wears an antenna cap and recalls how she was abducted by aliens and instructed by God to sell Amway, Mary Kay and Shaklee products; and “Toll Road,” in which the women sing about how they want to escape lives made miserable by their children, husbands and boyfriends.

This play is for adults only due to language and themes.