Music, dancing save TMP’s ‘My One and Only’ 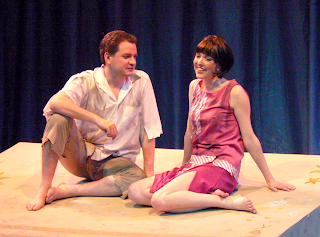 
Great music by George and Ira Gershwin and some wonderful tap-dancing by Vince Wingerter and Jenny McMurry save “My One and Only” from being just another mediocre story (book by Peter Stone and Timothy S. Mayer).

Making matters worse, when I saw it opening weekend at Tacoma Musical Playhouse there were so many distracting technical glitches that it seemed like there should have been another week of tech rehearsal before opening. There were overly long and noisy scene changes that left the audience with too much time sitting in the dark staring at the curtain, microphones that cut out, growling speakers and props visible in the wings before they were rolled out on stage.

But director Jon Douglas-Rake and his crew are good at what they do, and I have little doubt all those problems have already been solved. What can’t be solved so readily, however, is a lackluster script.

The play was written in 1983 as a showcase for Gershwin tunes which had been written much earlier. The story is set in the Roaring ’20s, with barnstorming Capt. Billy Buck Chandler (Wingerter) set to attempt the first ever trans-Atlantic flight from New York to Paris. But he’s sidetracked by an infatuation with former English Channel swimmer Edythe Herbert (McMurry).

Believing that he’s a hayseed who couldn’t possibly win her love, Capt. Billy goes to the Tonsorial and Sartorial Emporial and asks Mr. Magix (Jon Douglas Rake) to teach him how to capture Edythe’s heart. Mr. Magix’s advice is funny, but not very helpful, so Capt. Billy pursues Edythe ineffectually. She tells him to bug off, but he refuses to accept her rebuff and kisses her against her will, and suddenly she’s madly in love with him.

Ah, yes, the hero forces himself on the girl, and she’s swept off her feet. Variations on this stupid and chauvinistic plot device used to be a mainstay in romantic comedies. It should have been retired years ago. Here it shows up twice: again in the second act when the villain, Prince Nicolai Erraclyovitch Tchatchavadze (Andrew Fry) kisses Capt. Billy’s trusty mechanic, Mickey (Samantha Underwood), and she’s swept off her feet.

Edythe asks Billy to fly her to Havana to escape Prince Nicolai’s evil clutches. Nicolai sabotages the airplane, and they crash land on a deserted island (the location of the island is the only inventive – though unrealistic – joke in the story). Finally, Edythe runs off to Morocco, and Billy follows her there to live blissfully ever after.

Enough of the story line. This play actually won a bunch of Tony Awards in 1983 but not for the book. It’s the singing and dancing and the wonderful Gershwin melodies that won awards. And it’s the music, dancing, sets and costumes that make for a fun evening at Tacoma Musical Playhouse.

The sets are delightful, especially the cut-out skyline and cartoon cars and Billy Buck’s airplane. The headdresses on the beauty pageant girls at Club Oasis are amazing, and the flapper dresses are great. Kudos to costume designer Joan Schlegel and scenic artists Dori Conklin and Lorraine Hardin.

The lead actors are outstanding. McMurry looks the part of a flapper, she has a lovely voice – not too showy but strong and sweet, and she tap-dances with style and energy. Many theatergoers will remember her as Millie in “Thoroughly Modern Millie.” She’s equally good in this role. And Wingerter is as good a tap-dancer as I’ve seen on South Sound stages – smooth and snappy with natural grace. His duets with McMurry remind me of Gene Kelly and Ann Miller. And speaking of Kelly, their sweet duet to “S’Wonderful” on the beach is a tribute to Kelly’s famous “Singin’ in the Rain” number.

Mark Rake-Marona is charmingly sleazy as the Reverend J.D. Montgomery, a Baptist minister by day and a nightclub owner by night.

Andrew Fry plays the evil Prince Nicolai with a sneer, a wink and a ridiculous false mustache. And Underwood is terrific as the lovable airplane mechanic, Mickey. I wish she had a larger role.

Finally, Jeff Stvrtecky’s orchestra must be mentioned as the real stars of this show. Their renditions of Gershwin’s complex blend of jazz, classical and pop music had me humming “Strike Up the Band” all the way home.