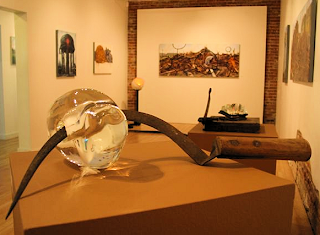 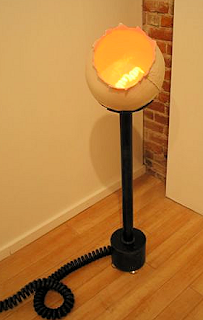 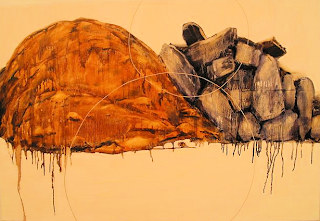 
Interesting show: Jason Greene, Molly Wolfe and Jeremy Bert at Black Front Gallery in Olympia. Wolfe and Bert complement one another nicely. Wolfe works with glass and found objects, Bert with recycled neon signs. Both are showing objects that are iconic and that seem to combine an early industrial look with sci-fi imagery. Wolfe’s objects are more like semi-primitive religious icons and Bert’s more futuristic.

Thrown into this mix like a party crasher who is welcome nevertheless is Greene, a painter from Portland who originally hails from Mississippi and attributes some of his imagery to that Deep South heritage. Black Front regulars will recall Greene from his show a year ago in which he showed a group of monumental and iconic paintings of old jars and bottles. The paintings he’s showing this time are not quite as good as those.

The unique hook in Greene’s earlier paintings was the way he superimposed rough contour drawings over paintings of the same objects. In these paintings — small town scenes with water towers and piles of residential rubble — Greene employs a variation on that hook. These small town scenes are loosely painted with extremely thin washes of oil paint that are allowed to run and drip profusely (I’ve always loved the way liquid turpentine etches a thin network of veins in oil paint, and there’s a lot of that in these paintings). Instead of the contour drawings of the same objects, he has superimposed line drawings of totally unrelated objects and patterns and in one painting a strange blob of paint that looks like a shot from a giant paintball gun from outer space. I am referring here to a painting called “Cyclops.” It is a painting of a blue-gray water tower that has been “shot” with a single blob of bright red paint that drips in a single teardrop Cyclops eye.

There are two large paintings of piles of wood and brick in vacant lots fronting rows of suburban track houses. In front of these are networks of lines that look like giant man-made spider webs. These were especially spooky to see on a day after viewing scenes of tornado destruction in the South.

The best of Greene’s paintings is a little painting of two piles of debris leaning into one another like lovers. A pile of dirt and a pile of concrete slabs. It’s title: “Dirt Loves Concrete.” I particularly like this painting for two reasons: first, because it depicts a very common sight viewed in a new way; and second, the close-up view with no distracting background makes the painting more important than the imagery.

The best of Bert’s work are two neon sculptures called “Orange Orb” and “Flashy Donut.” They sit next to each other on the floor and are each plugged into the same wall socket with thick, coiled electrical cords, which make them look like a single piece. I think they work much better as a single piece than either one could have alone. “Orange Orb” is a big white seedpod with orange neon light inside and “Flashy Donut” flat-edged, donut-shaped light on the floor. Both look like something that might be seen in another galaxy.

Wolfe’s cast glass objects look like they were scavenged from the ruins of a 19th-century monastery or, in the case of two glass steer horns, from a ranch in Texas. Two glass figurines that look like geishas — one red and one clear and each wearing a crown of thorns made from rusty nails — are particularly effective. The crown of thorns shows up in other pieces as well, in which she combines glass objects with rings of barbed wire. Also very intriguing is a piece called “Whole,” which is a clear glass heart (human heart not Valentine heart) with a hole through it and a rusty scythe blade through the hole. How she embeds some of these objects in glass is as mind-boggling as a ship in a bottle.