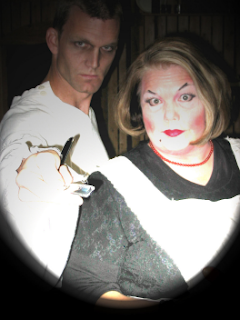 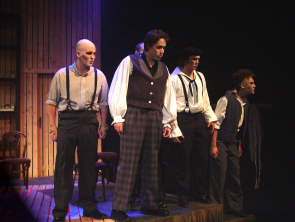 If there was ever any doubt that Olympia’s Capital Playhouse has become a fully professional theater, those doubts should be put to rest by its production of Stephen Sondheim’s “Sweeney Todd” starring two Equity actors, Tony Award-winner Jarrod Emick as Sweeney and Jennie May Donnell as Mrs. Lovett.

Emick’s career includes starring roles on Broadway in “Les Miserables,” “Miss Saigon,” “Damn Yankees,” “The Rocky Horror Show” and “The Boy From Oz.” He won the Tony Award in 1994 for best featured actor in a musical for his work as Joe Hardy in “Damn Yankees.”

Revising her 1999 role as Mrs. Lovett at Capital Playhouse, Donnell is a longtime local favorite most recently seen as Mona in “The Best Little Whorehouse in Texas.” This is not her first go-round with Sondheim, either. She played Old Lady/Blair Daniels in the first national tour of Sondheim’s “Sunday in the Park with George” and has acted and directed in theaters worldwide.

Subtitled “The Demon Barber of Fleet Street,” “Sweeney Todd” is a dark and frightening story of a ruthless mass murderer set to music. It is not suitable for children, and even many adults may find it hard to watch – even those who come to the theater knowing what to expect. I spoke to lighting designer Matt Lawrence before the play started, and he said that even after sitting through tech rehearsals the play was scary to him – as it is supposed to be – and he would not let his 11-year-old son see it.

The sets are stark and relatively bare, with a lot of the dramatic and eerie lighting effects coming from behind and underneath slatted boards. The costumes and makeup seem to be right out of “Night of the Living Dead.” Actors have ghostly white, charcoal-smeared faces. The dark shadows on Emick’s thin face make him look as if his skin is stretched across. His visage is truly frightening.

The story is based on a 19th-century legend of Sweeney Todd, formerly known as Benjamin Barker, who was falsely accused of murder and spent 15 years in a penal colony. Returning to London, he rents a room from Mrs. Lovett, who runs a bakery and is reputed to be the worst baker in town. He learns that his wife has poisoned herself after being raped by Judge Turpin (Zach Schwartz), the same judge who imprisoned him, and that his daughter Johanna (Erica Penn), now a young woman, is Judge Turpin’s ward.

Todd kills a man who recognizes him and threatens to blackmail him, then disposes of the body with Mrs. Lovett’s help by grinding him up and cooking him in her meat pies. Mrs. Lovett’s meat pies suddenly become popular, and Sweeney goes on a killing spree, adding more and more meat to her pies. All of this mayhem is put to powerful music sung by voices both operatic and sweet.

Emick’s voice has the strength of a Pavarotti but is lower in pitch and with a guttural resonance that is perfect for such a dark and heartless character. He plays Sweeney as a man consumed with unremitted anger. Director Jeff Kingsbury and Emick worked together to form this interpretation of Todd’s character. “I’ve never seen ‘Sweeney Todd,’” Emick said in a press release, “so I’m not coming with any preconceived ideas as to how the role should be done.”

Donnell’s Mrs. Lovett provides slight comic relief. She is the most complex and well-rounded character in the play, and Donnell plays her with a range of emotion from teasingly flirtatious to as brutal and cold as Todd himself.

Other than a few light touches from Donnell, the only humor comes from Adam Randolph, a young actor who plays multiple characters and holds his own with these much more seasoned professionals. His multiple appearances in a single scene as various murder victims are simultaneously funny and horrifying.

Another actor who does an amazing stint in this play is 16-year-old Eddie Carroll as the complicated and creepy Tobias. Also outstanding for her vocal range and believable characterization of a beggar woman is Sara Flotree.

Loosely based on the 2005 revival featuring Michael Cerveris and Patti LuPone, this production takes place in an intimate “asylum” setting, with the actors staying onstage throughout, and features a full orchestra offstage, rather than actors playing instruments, as is common in some performances.