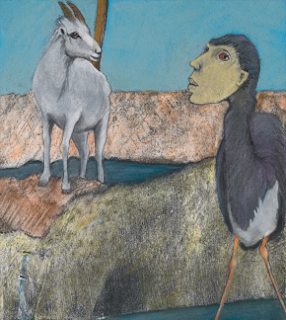 Moynahan is showing a series of pastel portraits all of the same woman. I was told that she is a Palestinian woman and that in each portrait she is wearing a different costume native to certain parts of Palestine. They look like Native American costumes to me.

The portraits are skillfully executed, but they are just portraits with no particular artistic merit that I can see. Photographs of the same woman would have been just as good. The only unique thing about them is that in two of the portraits the woman has blue skin — a too bright blue in one, but a striking, deathly pale blue in the other.

The Gamaeliuses are a fun husband and wife team. I'm told they work together in their laundry room/studio. They're showing quirky stoneware and metal ceramics with funny looking men and women and lots and lots of birds. In some of their pieces the men and women look like birds and the birds look like people, and more often than not the birds are perched on top of the people's heads or are in cages that also enclose the people's heads. Many of their ceramic sculptures stand on proportionately large metal spoke wheels that actually roll. The bodies of the ceramics are decorated with drawings in a scraffito etching method reminiscent of ceramic decoration from the Renaissance as well as of early American woodblock prints.

A typical Gamaelius piece is "Lemons and Fish in the Balance," figures in white stoneware with red oxide drawing on the surface. There's a man's figure. A bird with a human face sits on his head, and the man wears a strange birdlike beak for a nose. Like all of their works, this piece is very funny.

Frasca is the real artist in this show. I've seen a few Frasca shows over the past two decades, mostly at Childhood's End, and I think this may be the best yet. She's showing around a dozen monotype and pastel drawings of figures and animals that look vaguely mythological. It is not at all clear what these humans and animals are doing, but they clearly seem to get along, somewhat like the creatures in a Henri Rousseau painting. The mythological look comes from the fact that some of the animals are proportionally much larger than life and some have masklike faces. They are mythlike, but they are not myths.

There are no story lines.

There are qualities to Frasca's figures that remind me a lot of pastels by the late Louise Williams of Olympia, and some of her figures remind me of both Picasso in his classical period and of Gauguin's Tahitian paintings.

I think her primary concern is not so much the figures and what they are doing as it is the purely visual play of flat color with areas of dense texture.

Using the monotype print method, she creates textured areas that look like imprints made from leafs and twigs and rocks and wood that have been scraped or gouged. She seemingly superimposes figure drawings over these textured areas and fills them in with flat, pastel colors. In some areas, the pastel barely tints the textured areas while in others it almost completely covers the surface with heavy, chalky color somewhat like a Degas pastel.

It's certainly beginning to seem like I'm evoking a lot of artists, but that's often what good artists do; they assimilate influences from everywhere and make them all their own.

Picasso, often called the great eclectic, was famous for it.

This is definitely a show worth seeing.