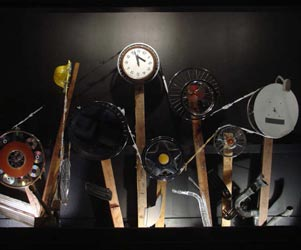 Beware of Bil Fleming’s installations at the Capitol Theater

I first became aware of Bil Fleming’s art when he had a really nice drawing in a juried show at South Puget Sound Community College last year. Now he offers two interactive sculptural installations in the Capitol Theater: “The Projectionists’ Gardens” and “Reverse Psychology.” Depending on your state of mind and your expectations, you may see these works as threatening, thought-provoking or purely entertaining.

Set in the alcoves to the left and right of the stage area, they are available for viewing only when the lights are up before and after films and concerts at the theater.

“The Projectionists’ Gardens” is a Rube Goldberg construction of viewer-activated wheels on a conveyor belt made from old plastic shopping bags — a garden of potted plants with wooden stalks growing out of plastic pots and flowers made from bicycle wheels, a clock, CDs, and a satellite dish. It is brilliantly lighted within the space of the alcove and looks theatrical. Viewers can activate the mechanism and control the speed by pumping a handle that turns all the wheels. It is playful and rather clunky — and surprisingly attractive. Apparently children love it. I was told that prior to a recent film children were lined up all the way across the stage-front area waiting their turn to pump the handle.

Fleming says it is also based on the idea of a gyre. Gyres are areas of ocean currents such as the North Pacific Subtropical Gyre, which are vortexes in which floating debris collect. A lot of plastic shopping bags get caught up in gyres. By using recycled materials and referencing gyres, Fleming’s work calls attention to the vast amount of waste material that litters the planet.
“Reverse Psychology” in the alcove on the opposite wall is a psychological challenge to the viewer. The face of the alcove is filled with a temporary wall of white particle board upon which is hung a chandelierlike lampshade made of an old colander. It casts light in dramatic beams, and within the beams of light the title of the piece is printed. Below this is a peephole with the printed instruction: DON’T LOOK and a crank handle with the printed instruction: DO NOT TOUCH — obviously intentional challenges to the viewer.

I dare not divulge what happens if you disobey the rule and look into the peephole or dare to turn the crank. Suffice it to say you may well be in for a shock. The concept behind this piece is an investigation into human psychology. We are all taught to obey signs. But do we have natural tendencies to disobey, to test the limits? Which is stronger — our conditioning or our curiosity?

Is this all just a big joke? Maybe. But Fleming’s credentials indicate seriousness of intent. He is a member of the Northwest Designer Craftsmen. Last year his work was purchased by the city of Seattle for the Portable Works Collection, and he won the People’s Choice Award and the Best Form and Function Award at ReStore’s Seattle Recycled Art and Fashion Show. Yes, it is playful; yes, “Reverse Psychology” is a bit of a put-on; yes, the messages conveyed are simple and not exactly layered with meaning. But does all of that make these pieces any less important as works of art? There are certainly precedents in historically important works such as Marcel Duchamp’s “Large Glass” and “Fountain” and “Étant Donnés,” also known as the peep show. While not as provocative or as avant-garde as Duchamp, Fleming is nevertheless entertaining, and if you’re going to a show anyway, you might as well take a look at “The Projectionists’ Gardens” and “Reverse Psychology.” But don’t look in the peephole.

Fleming’s installations can be seen through Nov. 29, and he says there are negotiations in the works to extend the run.