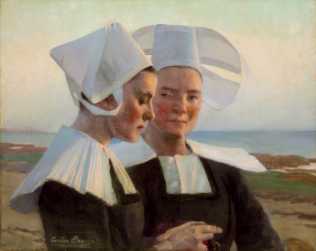 I visited the Tacoma Art Museum again last week. Having already seen most of what's on display, I went back to see what I'd missed and re-view shows I've already written about.
Guess what. Mary Randlett's Puget Sound landscape photographs are still as hauntingly beautiful as ever, and the quilts of Gee's Bend are as strong as I had expected (the preview article I wrote being based on photographs). And Cecilia Beaux's portraits are better than I expected — even if they are among the most eclectic paintings I've ever seen.

Beaux is an artist who was lost to history until very recently. A 19th-century portrait painter, Beaux suffered from having to compete with the likes of John Singer Sargent and Thomas Eakins — and from being a woman. Her sex was the biggest hurdle between Beaux and fame. With possibly the sole exception of Mary Cassatt, women artists were belittled or ignored until feminists in the late 20th century forced historians to take another look at them. Beaux was not in any of the art history books I studied, and until TAM announced the show "Cecilia Beaux, American Figure Painter," I had never heard of her. And then when I saw the photographs that accompanied the show announcements, I thought she was just copying Sargent's style.

That wasn't quite right. As I saw when I finally visited the exhibition, she copied everyone. Sargent may have been her greatest influence, but there are also paintings that look like Cassatts and Renoirs and one that looks almost like a copy of Whistler's "Arrangement in Grey and Black," aka "Whistler's Mother." All right, astute readers may note that "Whistler's Mother" is wearing a black dress and the woman in Beaux's "New England Woman" is wearing a white dress. But that's nitpicky; the composition and the expression are the same.

There is also a painting called "Twilight Confidences" that looks a lot like some of Gauguin's paintings of women in Britanny. This is a beautifully composed painting.
As with many paintings from the 19th century and earlier, viewers will probably marvel at the realistic detail of Beaux's paintings, but to me what make these paintings really wonderful are her compositional strength and her use of light.

The Gee's Bend quilts are displayed in a smaller gallery, which is a shame. The gallery is too crowded. It is unfortunate that the quilts had to be stacked on the walls and that the few that are hung where you can see both sides have to be so high that you have to strain your neck to see them. Ideally they would have all been hung on wires at eye level and in a much larger gallery, but that would have been impossible.

The women of Gee's Bend are all self-taught artists working in traditions that have been passed down from generation to generation, and every one of them seems to have been born with an unerring sense of design and color. The patterns are bold and exciting, and the color combinations are simply amazing.

Finally, I returned to the small exhibition of Mary Randlett photographs. Randlett, who lives in Olympia, has been photographing the people and places of the Pacific Northwest since 1949. Few artists, whether with brush or camera, have been able to capture the unique veiled light of the Northwest the way Randlett has. Her black and white photographs are quiet, contemplative and serenely beautiful.

If you have not seen all of these shows at Tacoma Art Museum, you are missing something very special.