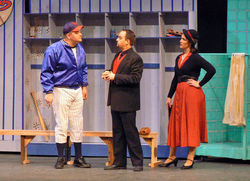 
Damn Yankees” is a lighthearted musical comedy that has lost little of its luster since first opening on Broadway in 1955. Now, half a century later, its prime appeal may well be to people who are nostalgic for the days when the word “damn” was considered risqué and when sports scandals were not everyday events.

Now playing at Tacoma Musical Playhouse, “Damn Yankees” combines the Faust legend with the story of Shoeless Joe Jackson and the 1919 “Black Sox Scandal” and wraps it all up with a tender love story.

Joe Boyd, played with restraint and heartfelt sincerity by Mike Wilkinson (who recently retired from Bellarmine Prep after 34 years as a drama teacher) is an aging baseball fan who harbors dim memories of his days of glory on the diamond. Joe dearly loves the Washington Senators (perennial losers) and hates the seemingly unbeatable New York Yankees. He’d do anything to see the Senators beat the Damn Yankees. He’d even sell his soul to the devil.

Oops! Did he say that out loud? Yes, he did. And the devil, in the guise of a slick salesman named Applegate (Sam Pettit), hears him and promises that not only will he make the Senators win the pennant, he will restore Joe’s youth and make him the star player who carries the team to victory. But Applegate has a momentary soft spot – or moment of madness – and he agrees to an escape clause; Joe can back out of the deal up until Sept. 25.

So old Joe Boyd becomes young Joe Hardy, aka Shoeless Joe, the greatest baseball player of all time. Young Joe is played by Matthew Posner, a newcomer to the South Sound.

One of the most wonderful moments in the play comes early on when Joe Boyd becomes Joe Hardy while singing the sweet lament, “Goodbye Old Girl.” Wilkinson begins the song with a soft and sweet voice tinged with a little gravel, sounding like a mellow tenor who may have smoked a few too many cigarettes. Then, at one point during the song, Posner takes over with a beautifully resonant baritone that shakes the walls of the Narrows Theatre. The change seems almost magical, even though there is no trickery involved, and the power of Posner’s voice is awe inspiring.

Young Joe Hardy becomes the hero of the Senators, but being a baseball superstar is not as satisfying as he thought it might be. He misses his wife, Meg (Diane Bozzo), and tells Applegate that he wants out. But Applegate doesn’t want to let him escape. He brings in an assistant to sway him, the irresistible seductress Lola (Sheri Tipton-Hasson). Tipton-Hasson acts the part of Lola with a brash and earthy sexiness reminiscent of Mae West and sings with an equally brash and growling voice, but her dance moves do not have the pizazz they could.

Pettit steals the show with his slyly understated winks and nods as the lovably evil Applegate. Whenever he is on stage, all eyes are on him. The same can be said for Chris Serface, who plays the Senators coach. Both Pettit and Serface are so natural onstage that, watching them, I get the feeling they are teasing the audience while poking good-natured fun at themselves and the whole of musical comedy.

And Bozzo is so good as Joe Boyd’s wife that she seems not to be acting at all but simply living the part. There are no histrionics on her part. Everything she says and does is understated and matter-of-fact, and she sings with power and conviction. Her duets with Wilkinson and her trio with the two Joes are among the most moving moments in the show.

The humor is infectious, and catchy tunes the likes of “Whatever Lola Wants” and “You Gotta Have Heart” make “Damn Yankees” a thoroughly enjoyable show. The only disappointment to me was that the dancing was not as spirited as I would like. That’s a shame, because Jon Douglas Rake is an excellent choreographer and the show is based on dance numbers originally choreographed by the legendary Bob Fosse. But on the night I saw it, the dance numbers all seemed to lack snap and sizzle.

Fortunately, Pettit and Serface and Tipton-Hasson have plenty enough snap and sizzle in their acting.