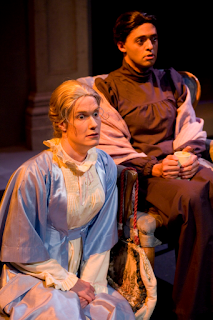 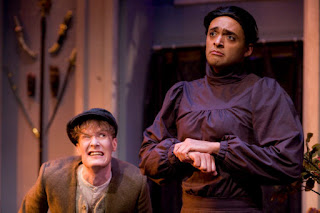 I loved "The Mystery of Irma Vep" when it played Tacoma Actors Guild three seasons back, and I loved it all over again when I saw it recently in a Sunday matinee at Centerstage's Knutzen Family Theater.

I have no intention of comparing the two performances other than to say that both were highly entertaining. But I mention the earlier performance for those who saw it and loved it and couldn't wait to tell their friends about it. Now you and your friends have another chance to see this delightful takeoff on 19th-century penny dreadfuls and early 20th-century Hollywood horror flicks.

Written by the incomparable Charles Ludlam, founder of The Ridiculous Theatrical Company in New York, the play is patterned after Alfred Hitchcock's gothic horror film "Rebecca" and is liberally sprinkled with literary references ranging from Poe to Shakespeare to Oscar Wilde, with further reference to films such as "Wuthering Heights" and "The Hound of the Baskervilles."

Ludlam wrote the play for two actors in seven roles (or eight or nine if you count the wolf and the mummy). Often it is played with four actors and sometimes with as many as eight. Director Alan Bryce decided to go with Ludlam's original vision of two actors in multiple roles, as did TAG three seasons ago. Not many community theaters are up to the challenge of doing it as a two-person play, but that is absolutely how it should be done because half the fun for the audience is seeing what characters the actors are going to come out as next and how quickly the actors can change costumes and personas.

Simmons opens the play in the role of Jane, a maid who is so regal in demeanor that one might easily mistake her for the lady of the manor. Then he morphs, with quick costume changes and slight attitude adjustments, into the dashing Lord Edgar, a virile and imperious hunter, and then into an unidentified intruder.

Lutyens first appears on stage in the guise of Nicodemus, a crippled swineherd patterned on Igor in "Young Frankenstein." He has a humped back and an exaggerated limp, and his face is painfully contorted as he gutturally grunts out of one side of his mouth. With a quick costume change, this pitifully comical creature changes into the shy and very proper Lady Enid, Lord Edgar's second wife. In Act 2, he appears briefly as Alcazar, an Egyptian.

The same two versatile actors also slip in and out of roles as the dead Lady Irma, a werewolf and a mummy.

"Irma Vep" is high camp, farce and murder mystery all rolled into one. Audiences will probably not want to think about it too much while they are watching (they'll be too busy laughing), but afterwards they should enjoy trying to figure out all the puzzles and literary and film references, and some will even recognize a clever anagram that will become obvious once they've figured it out.

Lutyens and Simmons are wonderful, and Bryce's skillful direction is as much in evidence as the howling of the wolf.

The set by Craig Wollam walks a tightrope between cheesy and lush. Speaking of cheesy, the so-called special effects are low-tech and laughably obvious, as they should be.

Finally, the sound effects and musical score deserve special attention. The music comes from lost-and-found tapes from Ludlam's original production, but the tapes came without instructions, so Bryce had to decide what to play when. His choices were excellent. Other sound effects adding to the enjoyment of the play range from wolf howls to the gulping down of tea to the horrible screech from the shower scene in "Psycho."

This play may be too scary for young children, but everyone else should love it.