The Actors of The Freedom Players 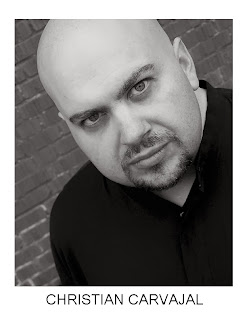 This is the first in a series of six articles about the actors appearing in Readers Theater's “The Freedom Trilogy” at the Tacoma Public Library.

Christian Carvajal is the author of Lightfall, a satirical thriller, and Rereading the Bible, an agnostic examination of Genesis and other sacred texts. He's also an actor and director who's worked all over Olympia, Tacoma, and Lakewood. You may recognize him, for example, from 8, A Christmas Story, Frost/Nixon, or Legally Blonde: the Musical. He juggles these roles with theatre criticism and feature writing for The Weekly Volcano (where he insists on spelling theatre the British way).

In 2011 I chose Carvajal as Best Actor in my “Critic’s Choice” column for his role as the professor in “Oleanna,” a Theater Artists Olympia production — as demanding a role as any actor can take on. He knocked it out of the park. He was also outstanding in Animal Fire’s production of Hamlet and in many other performances.

When we did this same set of readings at the Timberland Library in Olympia, Carvajal read the same parts he will be doing here: David Lawrence, the movie star and Francis Gossing, a young man who is an artistic and intellectual genius but socially awkward. He has to play David Lawrence as a teenage boy and as a mature man, and he skillfully makes the transition between these different characters, even believably transitioning between the younger and older David Lawrence within a single scene. Even though this is a reading with no physical acting, Carvajal’s performance is commanding.