My Brother Kissed Mark Zuckerberg is a one-man play featuring writer-performer Peter Serko and directed by Brian Desmond to be performed to be performed two nights only at Dukesbay Theatre. The show tells the tale of Serko’s younger brother David’s life and eventual death from AIDS at age 32. 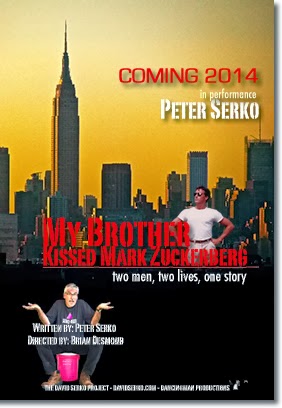 In early 2012 Peter started The David Serko Project to commemorate the 20th anniversary of his brother’s death. The goal was to learn more about David’s life in the 20 years they spent apart. The Project drew on the collective memories of more than 100 people on Facebook who knew David, most Peter did not know.

Peter said of his play: "Although a personal story, the production touches on universal themes of unconditional love, the true meaning of friendship, the importance of hope, and the enduring power of courage. It is a story of a man who changed and inspired others by being nothing more than true to himself and an honest and loving friend to others."

He described his play as "a moving yet joyous and laughter-filled tribute to a man tragically cut down by AIDS whose memory and life continues to transform and inspire."