Visions from the other side 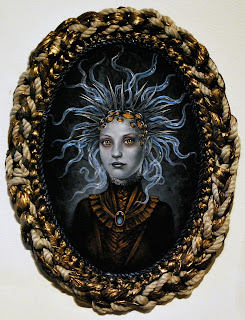 Strange creatures both human and animal lurk in the front rooms of Fulcrum Gallery. The show is called Visions from the Other Side Surrealistic Portraits, a Group Show. Featured are works by Larkin Cypher, Kelsi Finney, Jeremy Gregory and Keith Carter.

The work is inventive. Each artist has a personal, sometimes warped and often funny vision of the world or of worlds beyond this world. The craftsmanship, drawing and painting skill is undeniable. The strongest works visually are Gregory’s black jesso, pencil and aerosol paintings; Finney’s gouache, watercolor ad pencil drawings; and Cypher’s elaborate, homemade frames. Carter’s drawings of bears and gorillas and a cricket and a goldfish are skillfully executed but not particularly inventive or interesting in terms of color, composition or paint application. I do, however, give him credit for anthropomorphizing his animals in a delightful, children’s-illustration fashion, and I must say I got a kick out his picture of Santa Claus drinking Jack Daniels whiskey.

About Gregory’s paintings: First, I don’t know what jesso is. A misspelling of gesso, or maybe a painting media of his own invention. I’m also not sure about what he means by aerosol. Spray paint, I guess. But I do know that there is a wonderfully dark, chalky and brittle look to his paintings. They are full of mystery and seem to illustrate stories without giving enough information about what’s going on. There’s one in which a large ghostlike or masklike face emerges from the shadows and another in which can be seen resist writing or writing that appears to have been burnt into the surface of a picture as if etched by acid. There is one called “The Day It All Changed” that is dark and ominous — actally they are all dark and ominous — yet simultaneously very tender. It pictures what I interpret to be a father and his daughter tending an injured bird person.

Gregory is also showing some horror-show puppets that are designed so that you, if you buy one, can pose them any way you want. They come with their own settings and props — ready-made theatrical scenes. My favorites are a couple with black faces and hands and long, white fangs riding an old rusty skate as if it’s a convertible car. They’re called “The Creepy in love Couple.” There’s also a rodeo clown sitting on top of his dressing room/trunk with a chicken in one hand and a whiskey flask in the other that I really like.

Cypher is showing fantasy paintings of dark creatures in tones of charcoal black and sepia with wonderfully elaborate frames made of woven fabric.

Finney’s drawings are delicate with finely drawn details and rich impasto surfaces and a wonderful glow to the yellow tone that predominates.

In the back room is a photographic installation by Sharon Styer called Nightwatchman, which deserves a review all its own. I’ll grant it that favor next week in this column.

Here's more on this show
from The Weekly Volcano blog Spew

Surreal history
Visions from the other side

Surrealism was born in the early 1920s and soon became majorly popular throughout the world —popularized to a large extent by Salvador Dali, who was more showman than artist. The rallying cry of the Surrealists came from a line in a poem by Comte de Lautréamont: "beautiful as the chance meeting on a dissecting table of a sewing machine and an umbrella."

The guiding principle of Surrealism as exemplified by that line was the juxtaposition of things that could not logically go together in the so-called real world.

Combined with influences from the movies, from graphic novels and science fiction, Surrealistic art has become more popular today than ever, especially among young people. Somehow — although I can probably never fully understand this phenomena — the popularity of this trend in art (and I do see it as a trend or a fad as opposed to an art movement as such have classically been known) seems to be related to the popularity of zombies and vampires, the Twilight series, PBR and mac ‘n’ cheese. Yes, yes, that’s it. Surrealism today is the mac ‘n’ cheese of art.

When I was teaching art in the mid 1980s almost 99.9 percent of freshmen art students came to college with portfolios of Surrealist art or drawings and paintings right out of the pages of graphic novels. I’ve been out of touch with students all these many years since, but I have a suspicion this has never changed.

I have tremendous respect for the pioneer Surrealists and for the artists of their sister movement Dadaism (begrudgingly so in the case of Dali). Without them and without the parallel movement of Cubism we would never have had Abstract Expressionism or Pop Art or anything that has come since.

The one thing that made Surrealist art popular from the beginning was its tendency to present unreal images in a hyper-realistic manner. Dali’s melting clocks and Magritte’s strange inventions and odd juxtapositions of dream imagery and reality struck a chord with a vast public, and such imagery continues to strike the public fancy, even more so today when modern technology in movies and on the Internet has made such imagery commonplace.
This is the one drawback I see to contemporary Surrealism; everything that was once shocking has become routine. Nobody gives a second thought to buildings turned upside-down and trains flying through the clouds and men growing horns.

What got me thinking about all this was the current show at Fulcrum Gallery, Visions from the Other Side: Surrealistic Portraits, a Group Show. It may prove to be one of Fulcrum’s most popular show ever. It’s far from their best, but it’s a good show. The images are hardly even startling, hardly even strange or inventive. A lizard or a bear wearing a suit is no big deal. From the movies to tromp l’oeil murals, we’ve all seen so much fantasy art that even the most casual observer must be jaded by now, which means for this art to stand up to critical judgment it must be measured according to aesthetic criteria; it must be judged by the same yardsticks we’d use to measure the worth of a landscape or an abstract painting. That is color, composition, the use of rhythm, harmony and contrast. Actually I think it’s a good thing that it’s come down to this. I think the show at Fulcrum measures up pretty well. I enjoyed it.