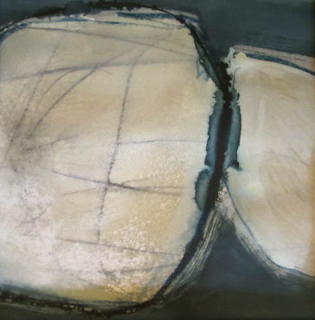 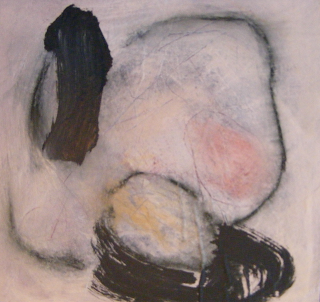 reviewed by Alec Clayton
Late blooming artist Becky Knold has landed on the scene, and I suspect we can look forward to seeing much more of her. On July 19, 2011 I wrote about her in an article for the Spew blog called “Becky Knold: The Great Unknown.” The opening sentence was: “Attention area art galleries: You need to show this woman's work.” Since then she’s been in quite a few gallery exhibitions, the latest just opened at Flow Gallery.

There are 18 small acrylic paintings in the show, many with other media such as charcoal or pastel. The average size is about 20x20 inches. These are paintings that evoke the land and atmosphere of the Pacific Northwest and bring to mind such things as big rocks, streams, caves and galaxies without actually looking like anything. In other words, she captures the essence of nature — the feel of walking down a path on an overcast day or beachcombing when the tide is out and fog rests on land and water — without actually attempting to imitate the forms of nature on paper or canvas. Her paintings may encapsulate the feel of nature but what they are about is shape and texture, harmony and contrast, and mark-making. This is what abstract art is supposed to be.

Her colors are muted. White predominates, often with darker forms peeking out from beneath swaths of semi-opaque white. Her paintings are atmospheric, yet her forms are often solid and rock-like. Typically she will group a few elliptical shapes on a white or gray ground, or there will be a surface of loosely painted brush marks with a few seemingly random spots of color or contrasting value. There is little or no illusion of space; everything rests on the same surface or there are a few overlapping planes in shallow space.

“Into the Desert” looks like a road or a stream running through a desert. The dirt is a rich burnt sienna or red clay color. It’s a simple, strong painting.

“Inclination” looks like a huge bolder resting on the crest of a hill. There is an interesting sense of scale in this one. It evokes the feeling of seeing something huge. It also brings to mind the myth of Sisyphus.

“Chaos I,” acrylic, pastel and metallic pigment is a circular form drawn with loose brush strokes on a white ground. It is like the doorway to another land. Such circular doorways or cave entrances are common in her paintings. Interesting here is the subtle contrast between layered impasto paint on the outer edges and the smooth wash of white in the center.

“Peripheral Vision” is like a Sumi painting and, simultaneously, like one of Franz Kline’s big, bold, black and white paintings.

“Coiled Energy,” acrylic and charcoal, has seven overlapping elliptical shapes hovering above ground in the fog. They are dark purple. There’s a sense of mystery here.

“Tempest” is a well-named painting that pictures a pure, stormy eruption of energy.

Knold’s one shortcoming, seen in only a couple of paintings, is when she defines her shapes too precisely, such as in “Moon Blossoms” and “Orientation.” “Orientation” also suffers because one clearly defined shape overlaps everything else in such a way as to disrupt the integrity of the picture plane. This one shape is clearly in front of everything else, and the viewer cannot see the whole for the part. This is the only painting in the show that fails to nicely integrate figure and ground.

Becky's work is evolving quickly and becomes more and more interesting to view. I hope everyone interested in art, be it abstract, or not, will make a point of getting to Flow.