Installations by Laura and Alessandro de Santillana at Museum of Glass 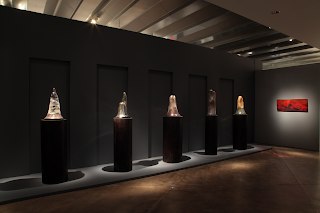 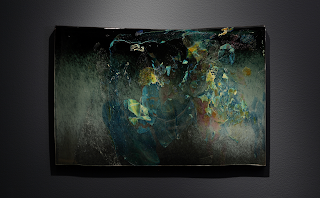 Siblings Laura de Santillana and Alessandro Diaz de Santillana continue a long line of Venetian glass artists from Murano, Italy. They are the grandchildren of Paolo Venini, founder of Venini & Co. in Murano, and their father, Ludovico Diaz de Santillana, was director of Venini from 1959 to 1985 and designed for the firm.  Crossing the Atlantic to work in the Museum of Glass Hot Shop, the Santillanas created an installation piece, filling four galleries in the museum based on the Hindu belief that the world is a series of disks made up of wind, water and earth upon which float four continents in a vast circular ocean. The works in each gallery - egg-like sculptural forms by Laura and wall-hanging glass paintings by Alessandro - represent different realms of the universe: space, earth, the sun, and the moon and constellations.

Needless to say, it is a large concept.

"During the Visiting Artist residency, I lived in the magical atmosphere of the Hot Shop," said Alessandro.  "Along with my personal color magician, Charlie Parriott, and maestro Benjamin Cobb and his crew, I was performing the rites of an alchemist - visioning visions becoming true, sometimes pleasantly surprised, other times frustrated by certain avoidable but unforeseen mistakes."

The galleries are low-lit, providing for an otherworldly feel. In the last of the four galleries, Laura's free-standing sculptures are lighted in such a way as to cast a mural-sized aurora borealis on the walls behind them. If it had not been for the docent leading a class tour when I was there, perusing the galleries would have felt like a trip into outer space. Or perhaps like a Jules Verne trip into the depths of the ocean or the bowels of earth.

Laura's sculptures are simple in form. Some are egg-shaped, other like stalagmites rising from the gallery floor or like breaching whales. Her forms are minimalistic and solid in appearance, with colors that range from deep and semi-opaque blacks and earth tones to gold and silver to clear and transparent. Her surface markings range from none to very elaborate. Some of her forms rise from wooden platforms while others sit on pedestals or in glass display cases or are mounted on poles. Her strongest forms are the heavy black, gold and earthen-colored forms that rise like mountains from the floor. The delicate and transparent eggs feature tangles of glass tubes winding worm-like around themselves inside.

Alessandro's wall paintings in glass are also heavy in appearance. And they present rare examples of how the inherent properties of glass can be exploited for their beauty and power without being gimmicky or overly decorative. They have much of the qualities of "all-over" color-field paintings by artists such as Jules Olitski and Larry Poons. All of them are about the same size, around two-by two and one-half feet and about an inch and a half in thickness. Some have crackled surfaces that look like cliffs of dried mud; others look like star fields and planets or slices of earth revealing the striations of rock. Among the most striking are a few with planet- or star-like forms floating in fields of brilliant blue.

This is a large show that deserves close attention. Also showing in the museum are the continuing exhibitions Beauty Beyond Nature: The Glass Art of Paul Stankard, Gathering: John Miller and Friends and the playful and kitschy Mildred Howard Parenthetically Speaking.