Difference and desire at Tacoma Art Museum
The Weekly Volcano, March 29. 2012
The big gay history/portrait show at Tacoma Art Museum is overwhelming. I came away exhausted but wanting more.
It would take at least three columns the size of this one to adequately review it. So don’t be surprised if I follow up with one or two or more articles in the Weekly Volcano blog Spew.
It’s a marvelous show filled with fascinating history and insights into the lives of gay and lesbian artists.

For instance, did you know that Jasper Johns and Robert Rauschenberg were lovers and that after they broke up Johns included encoded messages to Rauschenberg in paintings like “Ventriloquist” and “Souvenir”? Did you know that a whale was a gay symbol and that Marsden Hartley’s famous “Painting No. 47, Berlin” was a coded portrait of his gay lover, a German army officer? 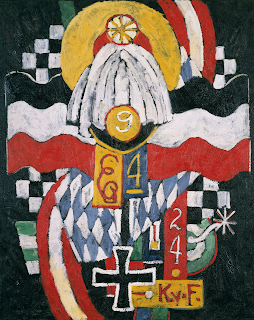 Painting #47 - Berlin, by Marsen Hartley.
Courtesy Tacoma Art Museum
There was a time when it was so dangerous to be openly gay that artists and writers used code words and symbols to get their messages to the few people they knew would understand. For instance, in Melville’s “Moby Dick” Captain Ahab and the great white whale symbolized a gay love-hate relationship. People in the gay underground knew this, which is why the whale became a gay symbol and why Johns used a barely visible image of a whale in his paintings.
There was also a time, back when Thomas Eakins and John Singer Sargent
were painting, respectively, “Salutat” and “Male Model Resting” that being gay meant something entirely different. Heterosexual men could have sex with gay men without shame so long as they played the male role and only those who played the female role were considered homosexual (the term “gay” was not commonly used). Eakins’ and Sargent’s paintings depicted homoeroticism as it was at that time, which was, to oversimplify, straight men looking at gay boys the way they looked at women.
Fortunately, all of the works in this show are accompanied by wall texts with detailed explanations so viewers can come to understand all of that, and there are many informational lectures and other events planned in connection with the show.
HIDE/SEEK traces the evolution of sexual identity through a diverse range of artworks including paintings, sculptures, watercolors, prints, photography and video beginning with Eakins and Sargent in the late 1890s through early modern pieces by Georgia O’Keeffe, Hartley, Romaine Brooks and George Bellows; to Johns, Rauschenberg, Warhol; and into the Stonewall and AIDS eras with works by artists such as Keith Haring, Nan Goldin, and David Wojnarowicz whose unfinished film “A Fire in My Belly” Was removed from the Smithsonian because it was deemed offensive, but is included in the TAM show.
And it is not just the fascinating history and the pride of finally being out and proud that makes this show superb. It is also the quality of the art. Just a tiny sampling: “Adhesiveness,” a marvelous early David Hockney from before he got all slick and commercial; the rich surface and edge quality of Hartley’s “Painting No. 47”; the irony and tenderness of Robert Mapplethorpe’s portrait of an S&M couple at home; the hypnotic quality of Warhol’s screen test videos; the Renaissance-like inner glow of Paul Cadmus’ flesh tones; the strangeness of Annie Leibovitz’s portrait of Ellen DeGeneres.
Be sure to leave yourself plenty of time to carefully study the art and read all of the wall labels. I would suggest a minimum of two hours.
[Tacoma Art Museum, HIDE/SEEK, Wednesdays–Sundays 10 a.m. to 5 p.m., Third Thursdays 5–8 p.m., adult $10, student/military/senior (65+) $8, family $25 (2 adults and up to 4 children under 18), 5 and younger free, Third Thursdays free from 5-8 pm., 253.272.4258, www.TacomaArtMuseum.org]
Posted by Alec Clayton at 5:21 PM