Gathering Together: Bodine, Adriene Cruz and Alonzo Davis at The Evergreen State College

By by Alec Clayton
The Weekly Volcano
on February 29, 2012 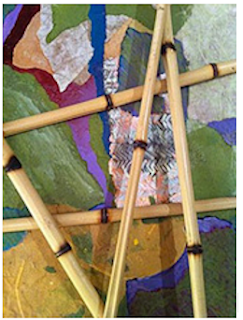 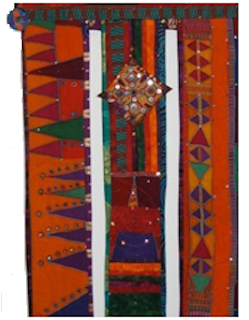 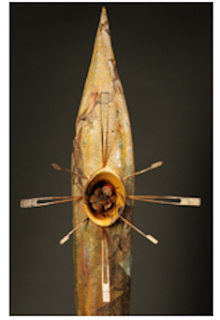 "Gathering Together:" From top, Alonzo Davis’ “Precarious Container Series,” Adriene Cruz’s “Sun Say,” and Danielle Bodine’s “Pacific Journey.” Courtesy TESC
The art of Danielle Bodine, Adriene Cruz and Alonzo Davis at The Evergreen State College - exhibited under the name Gathering Together - is a montage of many different styles and materials that contrast and complement one another.

I could almost hear rattles and drums and the chirping of birds upon stepping into the gallery, and I immediately gravitated toward a powerful little sculpture called "Hybred Podacus" that I wish I could have in my home. More on that later.

All three artists enjoy national prominence, but I was unaware of them until TESC brought them to Olympia.

Bodine is a fiber artist originally from Seattle now living on Whidbey Island. Cruz is a native of Harlem in New York City, now living in Portland. Davis, is a Southern Californian who attributes his art to influences from world travel. "The magic of the Southwest United States, Brazil, Haiti and West Africa has penetrated my work. ... and the colors and rhythms of the Pacific Rim continue to infiltrate."

The three artists combine varied materials and techniques including weaving, stitching, tying, painting, collaging, sculpting and more, with natural and manufactured materials to create artworks both traditional and innovative with a strong sense of connection to the earth and to peoples of many cultures.

Bodine's sculptural works in painted and woven fibers had a powerful impact on me. A series of three standing sculptures titled "Tell One I, II and III" are particularly mesmerizing. Tall and thin like twisting tree trunks, they are made of woven materials painted in dull tones of orange-brown and green. Each freestanding spire or column has an opening near the top like a knothole or a nest for birds or squirrels. Woven and painted objects reside inside of these little openings. One in particular looks like some kind of owl-like creature peering out. There is an ominous and mysterious look to these works.

Other outstanding pieces by Bodine are "Eastern Flight," "Jean's Song" and "Sea Dance," three wall-hanging pieces that are similar to the "Tell One" series but much smaller with incised drawings on the surfaces of origami cranes, butterflies and fish. And that most intriguing little sculpture called "Hybred Podacus" that looks like an irregularly shaped canoe made out of a gourd with strange pod-like creatures riding in it.

Cruz's collages of fabric with mirrors, beads, shells and other materials celebrate the style and energy of Africa and South America with colorful patterns and images of African women. The women are dressed in elaborately patterned gowns and headgear. Cruz's organic patterns are intricate, and his color choices are excellent.

Davis is showing a large series of works from his "Precarious Container" series. Each work is a kind of box or frame made of bamboo that is approximate two-feet square and four or five inches in depth. The boxes frame flat collages of colorful material and sheets of what appears to be paper with Asian writing on it. The bamboo shoots both frame or contain the collage elements and cross over the material in horizontal, vertical and diagonal lines, thus becoming a part of the design as well as a framing device. The collages and the bamboo lines are contrasting elements that mirror one another in shape and direction in some places and contrast in others. There is a delicate balance between contrast and harmony. By far the best of these is one that hangs flat (that is, parallel to the floor) from the ceiling about three feet above the floor. The position and horizontal orientation of this piece seems to be perfect for the shapes within.