He’s not heavy; he’s my brother 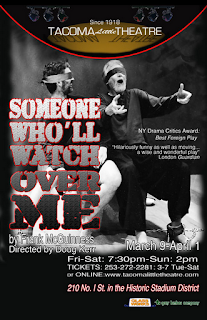 Someone Who’ll Watch Over Me at the Tacoma Little Theatre is definitely Great theater, with a capital G. One must realize, though, that greatness is a double edged sword.
Plays like this, what we call classic works, offer the opportunity for incredibly good acting and directing, which this play has in spades, and the chance to truly move an audience, which it certainly does. Before it is over you will have laughed, gotten depressed, been elated, felt another’s anguish, and generally had your guts and emotions tied up in knots.
Great theater, like great writing, does that, and that is both its value and its challenge. This is not, like some comedies and musicals, a fluffy dessert to be gobbled up giddily and easily. It is a complex and challenging seven course meal, fully fleshed out with fine wines and cigars, and one must come to the table with the stomach for that.
Written by Frank McGuinness, the play takes place entirely inside a small, bare, plastered brick cell in Beirut, where three captive men are chained to the floor. None really knows why they were taken there, nor if anyone on the outside knows, nor if they will ever get out. There’s an Irish journalist named Edward (Tim Samland), an American doctor named Adam (Tim Shute) and a British college professor named Michael (Martin J. Mackenzie). They can do little more than get up, lay down, and move around to the ends of their lengths of chain.
During their interminable incarceration, they interact with one another. They challenge one another, to keep strong; console one another when they lose hope; and entertain one another with songs, stories, verbal letters to the outside, and even imaginary movies that they create, to avoid going mad. Thus, this is not a play about a prison cell at all, but rather about humanity itself, and how three disparate strangers can, with spirit, verve, imagination and determination, help themselves and one another to survive. As I said, one must come to the theater with the stomach for such fare.
If you do, you’ll be amply rewarded. To begin with, the acting is absolutely flawless. All three men are outstanding both individually and as an ensemble. This is some of the finest, most varied and nuanced character creation you are likely to see on any stage. I simply can’t say enough good things about these three actors, so I’ll leave it at that. Kudos, gentlemen. Kudos.
The same is true for director Doug Kerr. The pacing, presentation, emotional range and every other element needed to develop such a challenging play are all there, skillfully translated into superb theater. The set, lighting, costuming were all completely appropriate and unobtrusively correct.
What transpires is indeed great theater, and that is something everyone should experience. But just as you would when going to see Shindler’s List or Saving Private Ryan, go prepared for the challenge. Yes, you’ll be well rewarded with éclat and even pleasure, but it is of a sort that comes with a price; your willingness to have your emotions torqued.
Someone Who’ll Watch Over Me
March 9th to April 1st 2012
Tacoma Little Theatre
http://www.tacomalittletheatre.com/
Posted by Alec Clayton at 9:03 AM